A #1 bestseller in paranormal suspense with over 100,000 downloads!An ordinary woman with an extraordinary gift is out to stop evil with two irresistible men in Elicia Hyder’s 3-in-1 boxed set: The Soul Summoner Series 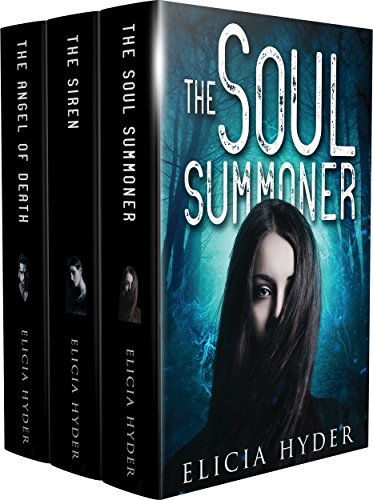 An ordinary woman with an extraordinary gift is out to stop evil with two irresistible men. One of them would die for her; the other would kill to keep her safe.

**Find out why The Soul Summoner series has been a #1 bestseller in Paranormal Suspense and has been downloaded over 100,000 times, earning hundreds of 5-Star ratings. Enjoy the first three books in the series in one convenient bundle at 50% off the cover price!**

Blessed or cursed with a connection to the souls of others, Sloan Jordan can see the best in people…and the worst. With nothing more than a glance at a photograph, she can judge the living from the dead and the good souls from the evil ones. For twenty-seven years, she’s kept her ability a secret, but eleven young women have been murdered in the mountains of North Carolina, and Sloan may be the only hope of finding their killer.

She has just agreed to help Detective Nathan McNamara with the case, when a stranger—who is as alluring as he is terrifying—shows up at her doorstep with a dark past and another puzzling mystery: she can’t see his soul at all.

Now Sloan is on the hunt for a deadly psychopath with two irresistible men. One of them would die for her, and the other would kill to keep her safe.

All the missing victims of North Carolina’s deadliest serial killer have been found, all except Rachel Smith. When the FBI produces a photo proving Rachel is alive and well in Texas, one case is closed but another one is opened. Either this is a case of mistaken identity or there are more people than just Sloan Jordan and Warren Parish who seem to walk the earth without a soul.

Along with Detective Nathan McNamara, Sloan and Warren travel south to find Rachel and solve the biggest mystery of all: determining who—or what—they really are.

THE ANGEL OF DEATH (BOOK 3)

After stopping a serial killer and shutting down an interstate human trafficking ring, Sloan Jordan is ready for a break. But back at home in Asheville, her problems have only just begun.

The supernatural world has taken an interest in her, and strange things are happening. Her powers are multiplying, she’s plagued by vivid nightmares, and a deranged young woman, babbling an unknown language, has been detained by police. The only clue to her identity—Sloan’s name carved into her arm.

If that wasn’t enough, the FBI has launched a full-scale investigation into her private life, believing Sloan might not be as innocent as she claims.

With her boyfriend, Warren Parish, deployed with the Marine Corps, Sloan is left in the protection of Detective Nathan McNamara. And their complicated friendship is about to be tested. Sloan has a secret…one that could turn even Nathan against her forever.

Enjoy Elicia Hyder’s Books? Tell us Why and Win a Free Book!
Authors and Publishers: How to Sponsor Kindle Nation Daily

The post A #1 bestseller in paranormal suspense with over 100,000 downloads!
An ordinary woman with an extraordinary gift is out to stop evil with two irresistible men in Elicia Hyder’s 3-in-1 boxed set: The Soul Summoner Series appeared first on Kindle Fire on Kindle Nation Daily.