#1 New Release in Christian Fantasy! What fate awaits a girl who hears monsters at night? Jaclyn And The Beanstalk by Mary Ting

Jaclyn and the Beanstalk 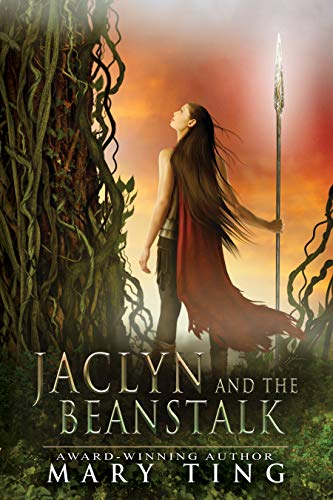 4.5 stars – 45 reviews
Kindle Price: $1.99
Everyday Price:
Text-to-Speech and Lending: Enabled
Enjoy Mary Ting’s Books? Tell us Why and Win a Free Book!
Don’t have a Kindle? Get yours here.
Here’s the set-up:

What fate awaits a girl who hears monsters at night …

Sixteen-year-old Jaclyn looks up to her father. An honest man who once fought for the king, he now teaches Jaclyn how to use her wits—and her sword. But he has a secret. And his secret may have a connection to the one thing Jaclyn is hiding from him.

Upon hearing “monsters” are terrorizing the small villages around Black Mountain, Jaclyn’s father and his friends head out to hunt them … but they don’t return. Armed only with her sword and three magic beans—a gift from a mysterious old woman—Jaclyn sets out for Black Mountain to save her father.

On her climb, one bean drops and grows into a beanstalk, catching her when she falls.

She isn’t the only one that takes the ride. Jack, her childhood friend and secret crush, is following her.

Together, Jaclyn and Jack must battle to save not only their fathers, but the townspeople the beasts plan to lay waste to before it’s too late.

“This is a twist on a fairytale of old. Mary Ting’s use of Jaclyn as a strong female is refreshing. Who says boys have to get all of the glory although Jaclyn’s friend Jack does join along for the journey. This is an adventure read that will captivate, from hearing the voices of monsters, magic beans, zealots, and saving her family, can Jaclyn face all of her fears to triumph?” 5 star review

The post <p style="text-align:center;font-weight:bold;">#1 New Release in Christian Fantasy! What fate awaits a girl who hears monsters at night? <em>Jaclyn And The Beanstalk</em> by Mary Ting </p> appeared first on Kindle Fire on Kindle Nation Daily.