At an event for Google Adwords advertisers the company revealed a bombshell statistic: 100 Billion Google searches are done every month. 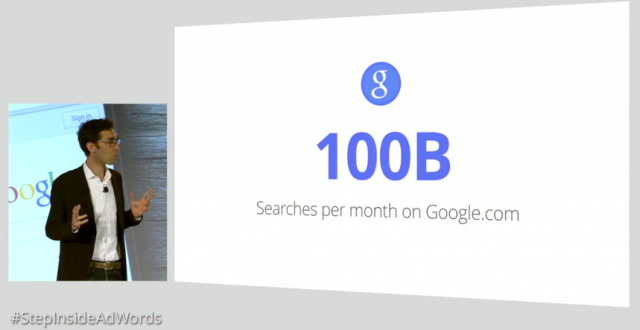 To put that in perspective: if you gave me a nickle for every time someone did a Google search, I’d be a millionaire in 9 minutes.

That’s about 3.3 billion Google searches each day. There are roughly 7 billion humans on earth. Clearly that’s not enough Google searches per person so the company wants to fly thousands of WiFi balloons around the world so 3rd world countries can get inernet, too. And no… that’s not a a joke.

What’s unclear for the 100 billion stat are the guidelines for what’s considered Google.com. If I do a google voice search that brings up a google search on my android phone, is that included in the 100 billion? If I’m getting information from Google Now is that considered part of this 100 billion?

The answer: it doesn’t really matter.

The 100 Billion statistic is a towering number, but when you consider that Google.com is just a small part of our relationship with Google, it’s an overwhelming statistic. Consider Google Maps, Google Navigation, GMail, Google Docs, Google Adsense ads seen on sites across the web, Android Phones, Chrome Browsers, and the list goes on and will continue to grow.

When Google first announced Android, they insisted they weren’t trying to create a cash cow of their own, and instead trying to bring the internet to more places so Google’s core services could flourish. Let me refresh your memory: in a 2008 interview a Google Executive flat out told me that there is no monetization strategy for Android.

Their sincerity was questioned but they’ve stuck by that principle, continuing to bring the internet to more places in more ways, looking especially towards opportunities like Google Fiber, Project Loon, and the Open Automotive Alliance.

Here is an excerpt from the full presentation:

For a couple of years we’ve been talking about the opportunity of mobile and mobile’s importance in your advertising. But today I’d like to tell you that it’s not really about mobile, it’s about consumers. And as consumers, what we really want to do is connect with the people and things that matter the most. Wherever we are, whenever, on any device.

If there’s one thing that you take away from my talk today, it’s this: it’s no longer about devices. It’s about connecting people to the content that they care about whether they’re online, on mobile sites, or in apps.

watch the full event above

Perhaps he should have added, “Or wearing Google Glass, or Android Wear, or watching Android TV, or riding in an Android Car developed by Open Automotive Alliance members.”

This is a theme I anticipate we’ll see pushed heavily at Google IO this year as well. It’s not just about all these different operating systems and platforms and hardware Google has pushed… it’s about improving the entire ecosystem and then unifying the experience under it.

This is something Google has been laying the groundwork for heavily for quite awhile, most recently with Google+ and the single sign on they’ve oh so fluently weaved into our experience across the web. Speaking of which, I absolutely love.

The event where this statistic was revealed focuses on the #1 source of Google revenue: advertisers. The company’s most recent earnings report disappointingly missed analyst expectations. The reason? Growing percentages of users are moving their web habits mobile, where advertising competition is lower and advertisers struggle to deliver measurable and effective campaigns.

This is a problem Google will be scrambling to solve in the upcoming year. Two obvious methods: encouraging advertisers to push downloads of their apps/games and getting advertisers to run ads that send users directly into the app if it’s already downloaded to their device (perhaps targeting them, too).

Over 80% of downloaded apps are used only once and then deleted.*  Lots of businesses are able to get their apps onto a device, but might never see their customer again.  Today we announced a new app re-engagement campaign type in AdWords for both search and display so that consumers can be taken directly into already-installed apps.  For example, if someone has the HotelTonight app installed on their phone and searches for “hotels in San Francisco” on Google.com, they can go directly to the specific page in HotelTonight about SF hotels, instead of being taken to the app’s main landing page.

I’m sure we’ll hear a ton more statistics like these come Google IO and start preparing yourself for information overload: me, Steve Albright, and Derek Ross will all be attending Google IO to bring you the most and best coverage possible.

It’s an interesting dance Google is doing and in many ways they’re walking a fine line. On the one side they’re expanding their business to more hardware and platforms yet simultaneously trying to consolidate the user experience. On another side they’re generating ad revenue as a search engine that penalizes scrapers and spammers and ranks content based on quality and relevance yet they simultaneously bypass these publishers by scraping bits of their content and delivering it to uses through Google Now and the Google Knowledge Graph.

Google has a lot of important decisions to make. The company’s astronomical growth looks like it could continue, potentially becoming the most important company of our lifetime. But when you’re the leader in the tech industry and you’re the #1 trail blazer, you’re much more susceptible to making missteps because you’ve got no footprints to follow.

Circle June 24th and 25th on your calendar with magic marker, spray paint, panther’s blood, whatever… and pop into Phandroid to see what revolutionary things Google has lined up as we cover Google IO 2014 live from San Francisco.