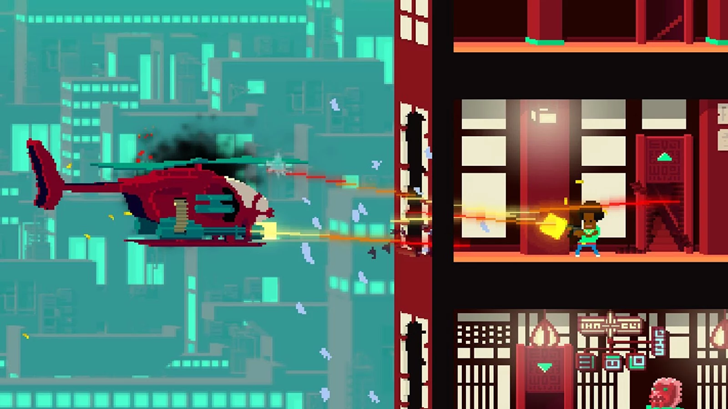 Devolver Digital has consistently brought some of its published titles to Android, so long as you're lucky enough to own a SHIELD-branded machine. Their latest port is Not A Hero, a 2D shooter that has very a old-school style of gameplay mixed with a somewhat modern approach to everything else. The game absolutely revels in its stylized, Guy Ritchie-esque British ultra-violence mixed with the kind of humor you might expect to see on any given Internet forum.

The structure is pretty simple: you have guns, bad guys have guns, and it's your job to bring the two into glorious conjunction. Players get a choice of several stylized action movie stereotypes, each of which has different weapons and abilities (a lot like Broforce, if you've ever played it). The objective is to shoot as many "criminals" as possible in the 2D stages, though since you may be working for a supervillain bunny from the future, the ethical justification for doing so is sketchy at best. Action is fast and fluid thanks to a dynamic movement system.

According to our gigantic Play Store device compatibility lists, Not A Hero is available on all SHIELD devices, plus the Nexus Player and the Google ADT-1, so we're assuming it's compatible with other Android TV hardware as well. In any case, players will need a physical controller to actually play the game. That's a bit disappointing - did no one tell Devolver that you can pair a Bluetooth controller with more or less any Android phone or tablet? The game costs $13 with no in-app purchases, which is the same price it goes for on Steam and other digital download services.