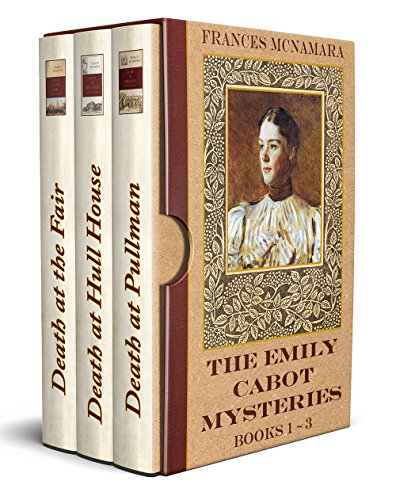 Kindle Price: 99 cents
Everyday Price:
Text-to-Speech and Lending: Enabled
Don’t have a Kindle? Get yours here.
Here’s the set-up:

A boxed set of the first three books in the Emily Cabot Mysteries series: Death at the Fair, Death at Hull House, and Death at Pullman.

Praise for the Emily Cabot Mysteries

Rich with historical details that bring turn-of-the-century Chicago to life, these novels will appeal equally to history buffs and mystery fans.

Death at the Fair: The 1893 World’s Columbian Exposition provides a vibrant backdrop for this exciting mystery. Emily Cabot is one of the first women graduate students at the University of Chicago, eager to prove herself in the new field of sociology. While she is busy exploring the Exposition with her family and friends, her colleague, Dr. Stephen Chapman, is accused of murder. Emily sets out to search for the truth behind the crime but is thwarted by the thieves, corrupt politicians, and gamblers who are ever-present in Chicago. A lynching that occurred in the dead man’s past leads Emily to seek the assistance of the black activist Ida B. Wells.

Death at Hull House: After Emily Cabot is expelled from the University of Chicago, she finds work at Hull House, the famous settlement established by Jane Addams. There she quickly becomes involved in the political and social problems of the immigrant community. But when a man who works for a sweatshop owner is murdered in the Hull House parlor, Emily must determine whether one of her colleagues is responsible, or whether the real reason for the murder is revenge for a past tragedy in her own family. As a smallpox epidemic spreads through the impoverished west side of Chicago, the very existence of the settlement is threatened, and Emily finds herself in jeopardy from both the deadly disease and a killer.

Death at Pullman: A model town at war with itself…George Pullman created an ideal community for his railroad car workers, complete with every amenity they could want or need. But when hard economic times hit in 1894 lay-offs follow, and the workers can no longer pay their rent or buy food at the company store. Starving and desperate, they turn against their once benevolent employer. Emily Cabot and her friend Dr. Stephen Chapman bring much-needed food and medical supplies to the town, hoping they can meet the immediate needs of the workers and keep them from resorting to violence. But when one young worker—suspected of being a spy—is murdered, and a bomb plot comes to light, Emily must race to discover the truth behind a tangled web of family and company alliances.