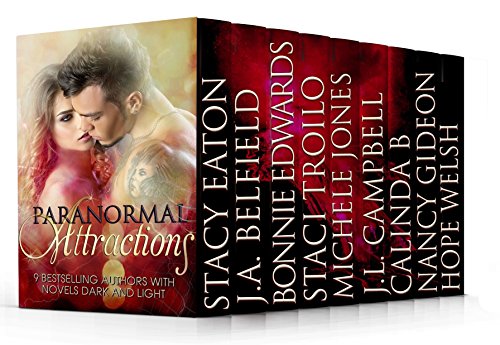 Vampires, sexy ghosts, gargoyles, mummy’s curses and a secret magical society are some of the fabulous paranormal twists you’ll find in PARANORMAL ATTRACTIONS, a boxed set of 9 steamy romances brought to you by Amazon, Barnes & Noble bestselling, and award-winning authors. Lose yourself in these light and dark paranormal stories that are only around for a short time.

My Blood Runs Blue – Stacy Eaton
Officer Kristin Greene’s life is turned upside down when she begins to investigate a homicide and finds that killer is something out of her nightmares. What will happen when Julian and Alexander introduce Kristin to the world of vampires?

Instinct – J.A. Belfield
Werewolf Sean Holloway treats the village marketplace like a sexual buffet, until his instincts guide him toward the unique scent of the nonchalant Jem Stonehouse. Despite his pack’s rules, he wants her—an attraction that can bring only danger for Jem. Will Sean defy his own Alpha to save the woman he loves?

Parlor Games – Bonnie Edwards
Carrie MacLean and Matt Crewe have secret needs when they arrive at Perdition House for a sexy bachelor auction. Can love survive the mesmerizing spirits of the hookers who once lived and worked in the haunted bordello?

Love Set in Stone – Staci Troilo
Perched above Pittsburgh, a gargoyle spends centuries as a protector of humanity while he waits for the one who will break his curse and free him from his stone prison. When he finally finds her, her life is in jeopardy, and he realizes he may face eternal damnation to save her life.

Romance Under Wraps – Michele Jones
The Carnegie Museum of Natural History gets an Egyptian installation, and it seems to come with the ubiquitous mummy’s curse. Death and destruction abound. But the real curse is on the mummy’s advisor—he must teach the mummy how to pass forty-three judgments or find the reincarnated queen and win her love—or they are doomed to continue reawakening every century to try all over again.

Phantasm – J.L. Campbell
After losing her husband in a tragic accident, Josette is convinced she’s on the road to recovery—until Dwayne starts appearing to her in ways that take her to the edge of terror and back. Can Mario Browning, a persistent and perceptive man, save her from falling into a dangerous abyss between the world of the living and the dead?

The Beckoning of Beguiling Things – Calinda B
Can 24 hours really change your life in magical ways you never imagined? Marissa Engles is about to find out, when she heads to Las Vegas, meets sexy, Thunder and Lightning dancer Chris King and unwittingly unleashes the force of a secret, global, magical society known only as the Numina.

Remembered by Moonlight – Nancy Gideon
The deadly leader of a shape-shifter clan with no memories of who he is and a dedicated cop hiding a heart-breaking secret face impossible odds in steamy New Orleans that conspire to pull them apart. Because the enemy they pursue . . . might be him.

Once Forbidden – Hope Welsh
Devlin wants her from the moment he sees her save a child in a fire, but it’s forbidden for vampires to change humans. Can he bear to let her go?