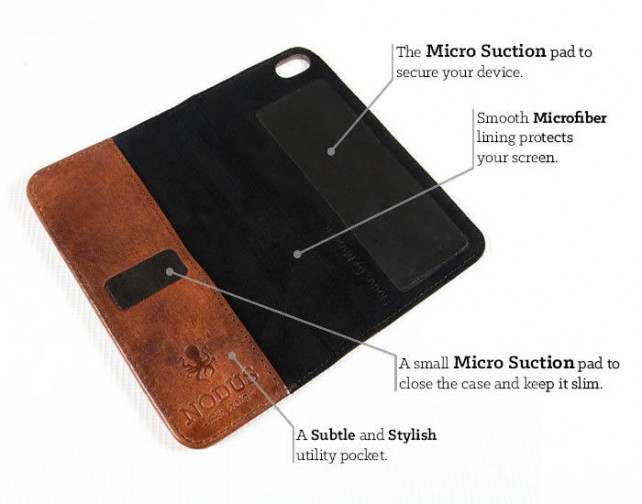 Microsuction cases and stands have impressed me before, and as such it’s pleasing to see another case manufacturer take advantage of the technology. Called the “Access” case and available to back online using Kickstarter, the accessory can be used with an iPhone, iPad, or iPad mini.

For those unfamiliar with the technology, microsuction pads can attach to an iDevice and either hold it in a case, or support it in a stand, like Piel Frama’s FramaSlim and Dekke’s Slope, respectively. No residue is left on the iPhone or iPad, and the microscopic suction cups work perfectly with the the material of Apple’s iDevices.

Much like FramaSlim, the Access case offers iDevice users a microsuction-powered case for iPhone and iPad, holding the smartphone or tablet in its place using one large microsuction pad. However, Access goes one step further, providing an additional microsuction pad on the inside of the case’s cover in order to allow users to secure this cover to their iDevice (instead, FramaSlim uses a magnet, which works well but isn’t too secure at times).

We created the Access Case after being frustrated by cases that impaired the functionality and beautiful design of our iPhones and iPads. We wanted to protect our devices and have them remain as the manufacturer had intended. When we became aware of Micro-Suctiontechnology we knew we had found what we needed to make this a reality. We set about testing and developing our design and we are really excited to share it with you. Now we need your support to order the first production run and bring the Access Case to market.

To get an Access case of your own, users will need to offer a contribution to the product’s Kickstarter project of39 ($64) for the iPhone case, 69 ($113) for the iPad mini case, and 79 ($130) for the 9.7-inch iPad case. If the project reaches its funding goal of 20,000, users should expect to receive their own Access case in March next year.

For more information, including the option of contributing to the project, head over to the Access case’s Kickstarter Web page.

See also:India To Get Apple’s iPad Air, Second-Generation iPad mini On Dec. 7,Kantar Reports Increase In Apple’s Market Share Thanks To Its New iPhones, andApple Worm Case For iPhone Hides A Lightning Cable, But Doubles As A Stand.

The Access Case Offers Leather Microsuction-Powered Protection For iPhone, iPad is a story by AppAdvice.com
AppAdvice - iPhone, iPad, iPod, App Reviews + News
Get the latest tips & apps for your Smartphone