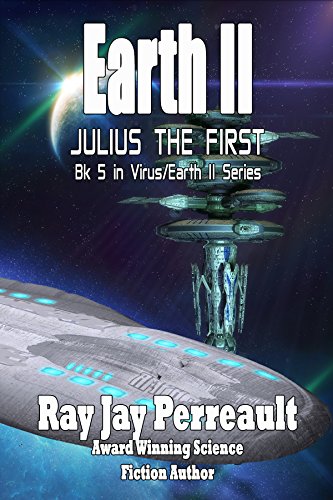 4.2 stars – 4 reviews
Kindle Price: FREE!
Everyday Price:
Text-to-Speech and Lending: Enabled
Don’t have a Kindle? Get yours here.
Here’s the set-up:
Fifth book in the Virus/Earth II Series
In this post-apocalyptic story, Earth has survived an alien virus which was used to cleanse the planet before harvesting. As war reparations from their first alien contact, mankind was given thousands of space ships and robots. The few survivors know they must adapt to survive. There is an unexplored Galaxy beyond their solar system. They must be wary of both their neighbors and also Julius an intelligent computer unleashed during the viral attack. Julius was programmed to deal with the two threats to his existence. SIMPOC, another intelligent computer programmed to help humans, and the remaining humans. Julius also received a huge space ship from the aborted attack on Earth, but he must find resources so that he can deal with SIMPOC and the survivors.
He must explore the Universe around him, manipulating and stealing to build up his arsenal, and he has captured a very import human, but he hasn’t figured out who he is, yet!
Be sure to check out the first four books in the series: “Virus-72 Hours to Live,” “Virus -Earth’s Last Battle,” “Earth II-You Have no Honor,” and “Earth II-Rebirth.”
See more by this author!
Authors and Publishers: How to Sponsor Kindle Nation Daily