We’ve been waiting for LG to announce the successor to the LG G2 as well as the latest flagship LG G3, but over the time, we’ve only heard rumours and speculations about what might be coming. So far, we know that the phone might be coming with a 5.5 inches of QHD display, and some other notable features including the Snadragon 800/801 processor along with 3 gigs of RAM. Then there were some more reports suggesting that the phone will feature a flat UI, we also got our hands on a screen shot to prove that.

Now the latest leak shows us two images of what seems like the Japanese variant of LG G3. The phone is dubbed LG Isai, and should be heading to Japan. The pictures we’ve got our hands on are showing the phone in two different colour and also revealing some interesting information about the phone itself.

The leaked pictures are showing the front and the back of the phone in white and blue colour, the phone carries a brand Isai on the front panel and an ‘LG Electronics’ logo at the back. Despite having no official word on the phone, the leaked images are still quite impressive. The images show us that the bezels on the smart phone are extremely thin, which definitely looks good and is quite understandable given the phone is rumoured to have a 5.5 inches of QHD display. Slimmer bezels could be the reason behind accommodating the screen itself.

You can also see that LG is back with the volume rocker on the back, something we’ve seen on LG G2, the design seems much more refined this time though. However, looking at the pictures, we don’t see any sign of a lock button, but looking closely at the back of the phone, you’ll see a strip of some sort right next to the volume rockers. Could it be that the strip has something to do with the lock key, it can a fingerprint scanner as well.

You can check out the leaked images below, thanks to @evleaks. 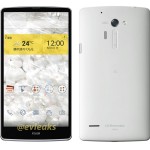 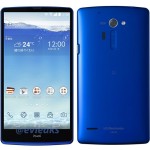