The Amazon Fire HD 10 Kids Edition is a Fire HD tablet in children’s clothing. It’s the same slate that’s available for adults but it’s been given a massive rubber bumper to protect it from the inevitable knocks it will get while in small hands, and a whole host of child-friendly software additions and cut-price subscription-based goodies.

The idea behind these tablets is that they are safe for little ‘uns to enjoy, while offering peace of mind to parents. The tablet allows parents to monitor their kids’ media usage from close-up or afar. They are also nice and durable, which we found out in our tests…

This tablet is available now - price-wise, it currently retails for £199/$199. For this, you get a year’s subscription to Amazon’s Kids Unlimited / FreeTime Unlimited service, which offers over 5,0000 bits of children’s content.

Also in the box is a great two-year warranty. If the thing breaks at any time then it gets replaced for free, no matter what happened to it. So, even if it’s smashed and it’s completely your child’s fault, another one will be in the post.

The original Fire HD 10 is a pretty plain device, but this is something you don’t have to worry about with the Kids Edition as the thick plastic body is covered with a big rubber bumper.

The bumpers you can choose from are an unimaginative blue and pink. While Amazon hasn’t revealed why it has chosen these colors, it’s pretty obvious (and a little tiresome) that it has gone down the boys and girls route. The rubber bumpers are nice and durable, though, and protect the tablet that’s inside well.

Amazon is quite clear that, despite the kid-safe exterior, the Amazon Fire HD 10 Kids Edition isn’t actually a toy - and it has the specs to prove it. 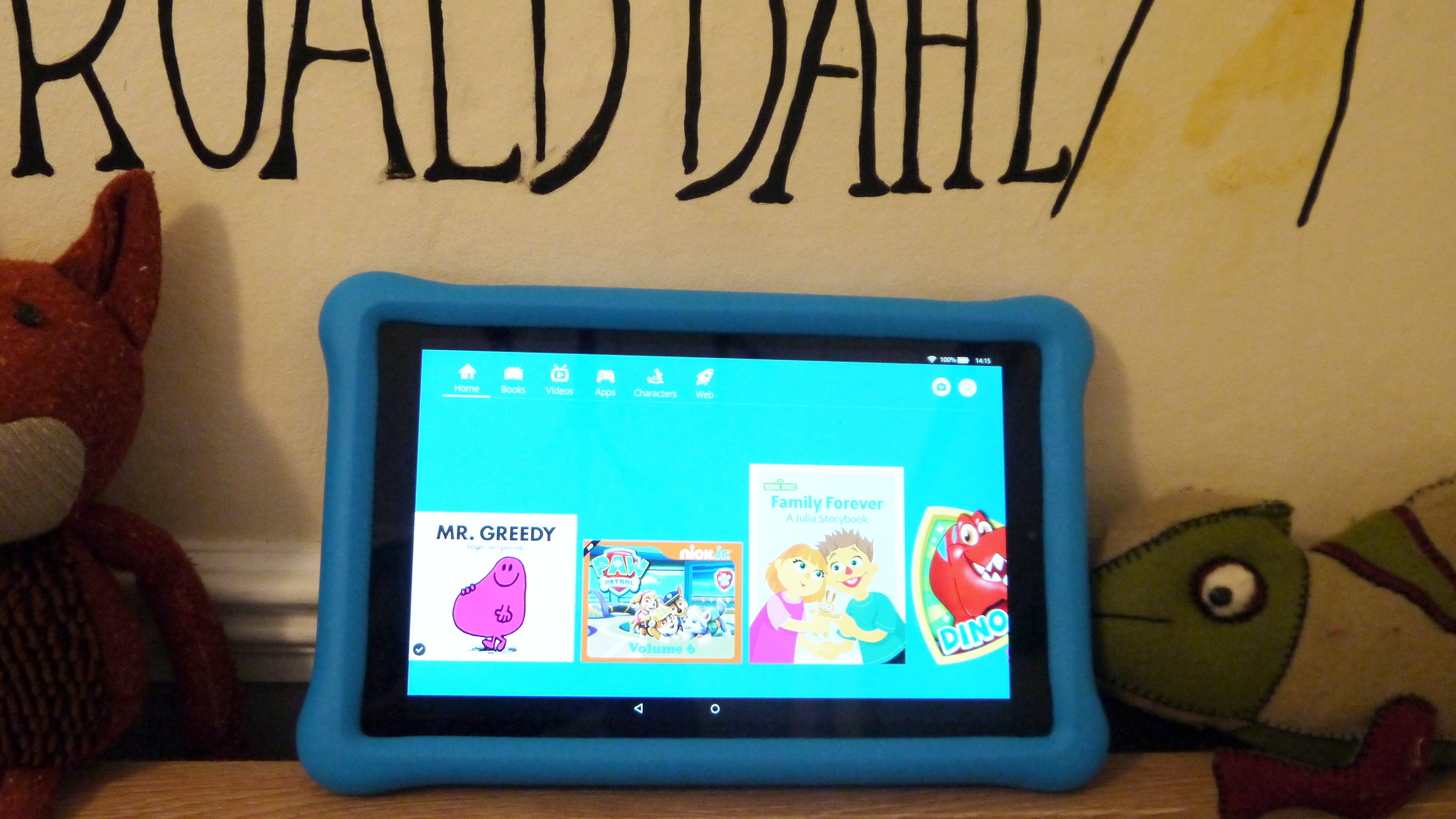 Again, this is the Amazon Fire HD 10 so you get the same specs. They include a: 10.1-inch 1080p Full HD display, 32GB of internal storage, and up to 10 hours of battery life, although this obviously varies depending on what you are doing with it. There is also a microSD card slot for up to 256GB of expandable storage.

What a child would want to do with all that memory is beyond us, but it’s there if you want to preload a load of movies for a long trip, or download a bunch of games that need a chunk of storage.

The tablet weighs in at 660g, which is a little on the heavy side for smaller children.

Other features include a camera on the back. Usually we get ridiculously irate at the mere thought of someone using a tablet as a camera (especially outside, in a crowd) but it’s endearing on this tablet, with Amazon making the controls cutesy enough that taking photos with the device is actually rather ‘fun’. 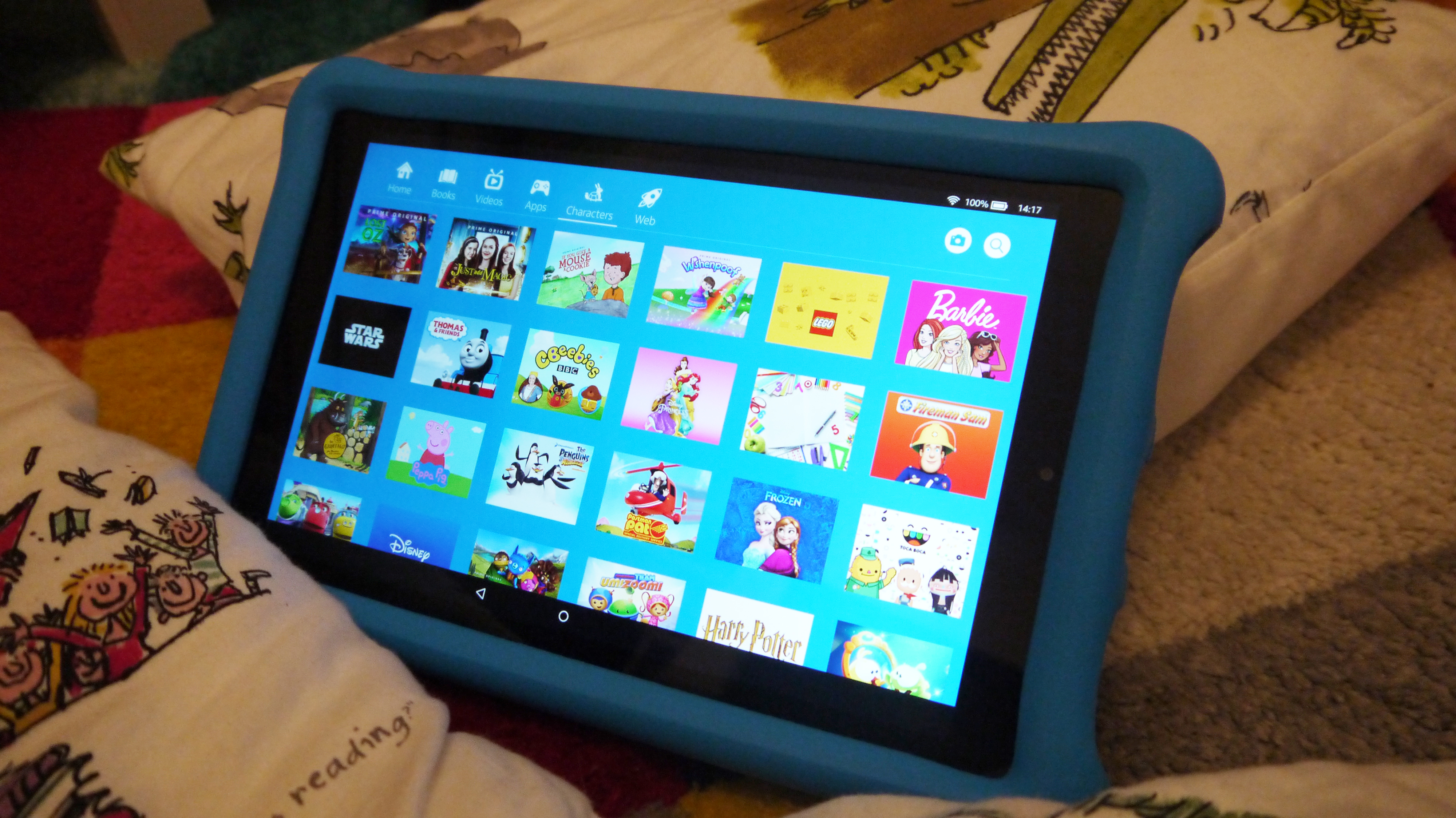 This is all thanks to the post editing, which has loads of stickers, the ability to add text and shapes to the picture.

Buttons on the device include a power on/off and a volume rocker, and there’s a 3.5mm jack and microUSB charging on board. All of these things are protected by the bumper so you have to reach quite far in to use them - it’s obvious this is by design but it is a little fiddly.

While on the outside you are getting an Amazon Fire HD tablet and extra rubber, on the inside it is a whole different story. This is all thanks to the child-friendly operating system that Amazon uses.

The OS is extremely kid friendly and easy to use. It's a version of FireOS and is worth noting that you don't get Alexa controls here. What you do have is a home screen that shows off anything you have been looking at recently and at the top of the screen are a number of categories.

There’s books, videos, apps, characters and the web to choose from, as well as access to the camera and search functionality. 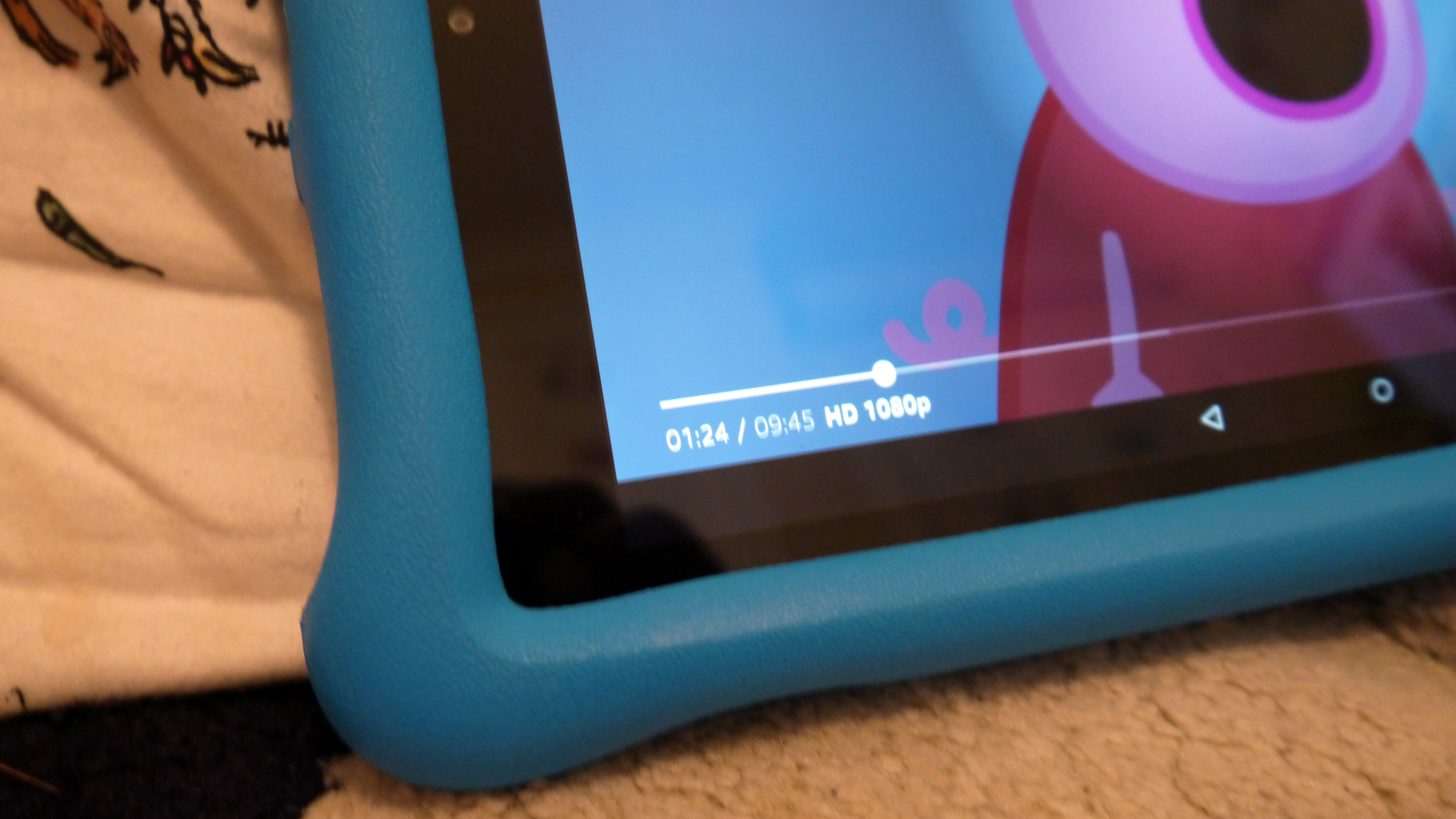 The tablet works best when complemented with Kids Unlimited (in the US it’s called FreeTime Unlimited). This is a subscription-based service that’s bundled with this tablet - you get one year free, then it’s £1.99/$1.99 a month after that.

As subs go, it’s a decent one. Amazon seem to be adding to it all of the time and there is around 5,000 things to choose from - from books to videos and games. You find these by clicking into the categories and from there, it’s a simple click on the big thumbnails. 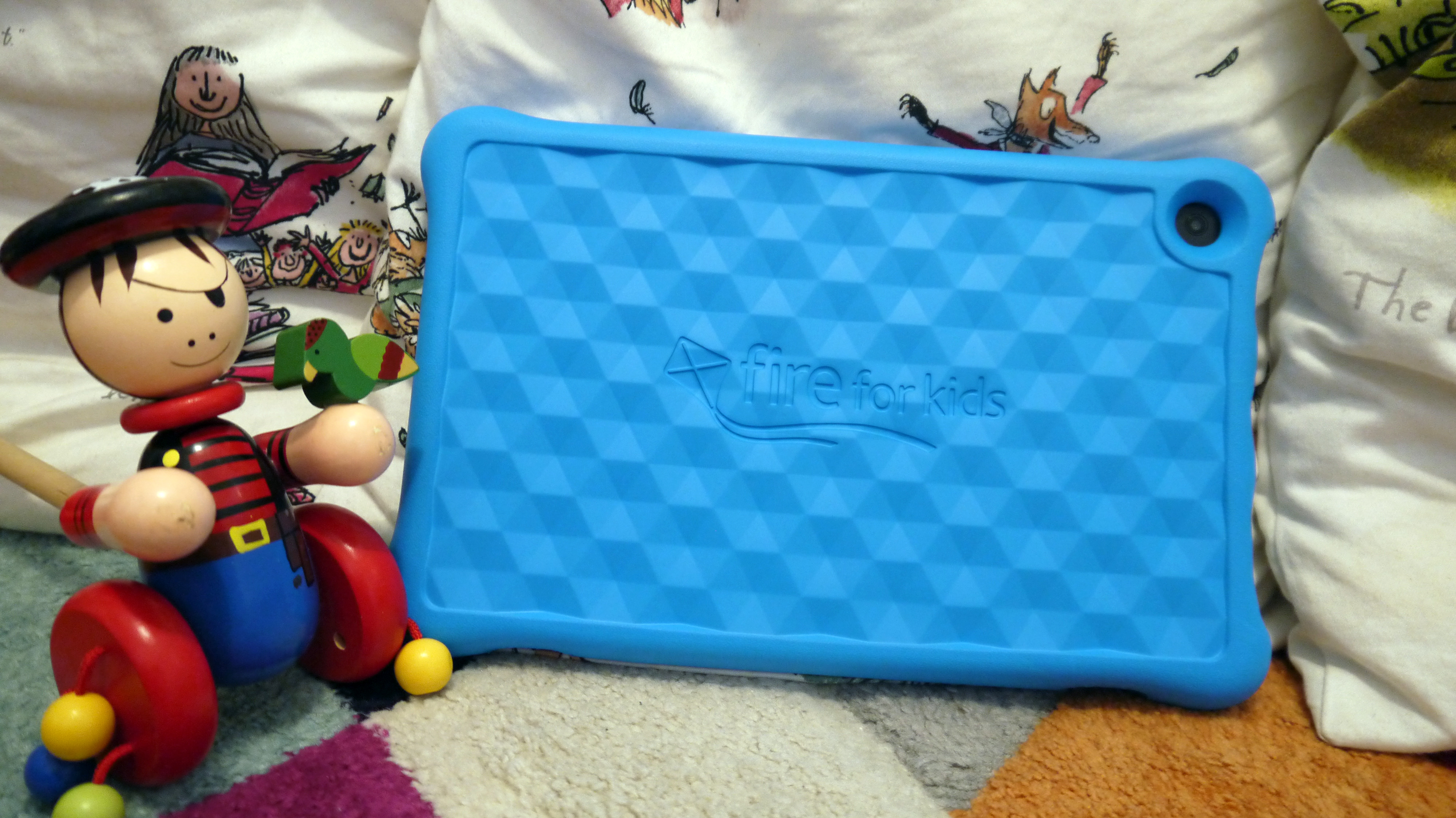 A lot of content does mean that this thing could get a lot of hours’ play. There are ways to monitor and restrict this through the settings, however, and everything can be secured with the use of a pin. In the settings you can set daily goals and time limits, manage the storage on the device, filter things by age and add and remove content.

This functionality is pretty in depth and gives you a lot of control over what your child consumes. But you can go even further and log into the Amazon Parent Dashboard and monitor what they do through an app on your device of choice.

The Amazon Fire HD 10 Kids Edition has far more grunt than what the average child will use. Browsing through the myriad TV shows and books was like a knife through butter, we didn't encounter any stuttering whatsoever.

Watching a video was quick and seamless, although the screen never went quite as bright as we would have liked. When it came to playing games, the most graphically intense games (in the case of our tests, Lego Batman) held up well thanks to the Quadcore 1.3GHz processor.

One slight bugbear is that you do have to wait for things to download. The OS is a little deceiving, in that it feels like an instant-play service such as Netflix. For that to work, it would mean streaming and that’s not what happens here.

Click on a game and you have to wait for it to download. This may get a little tiresome for kids that are used to things being available in an instant (or at least a slight buffer away). 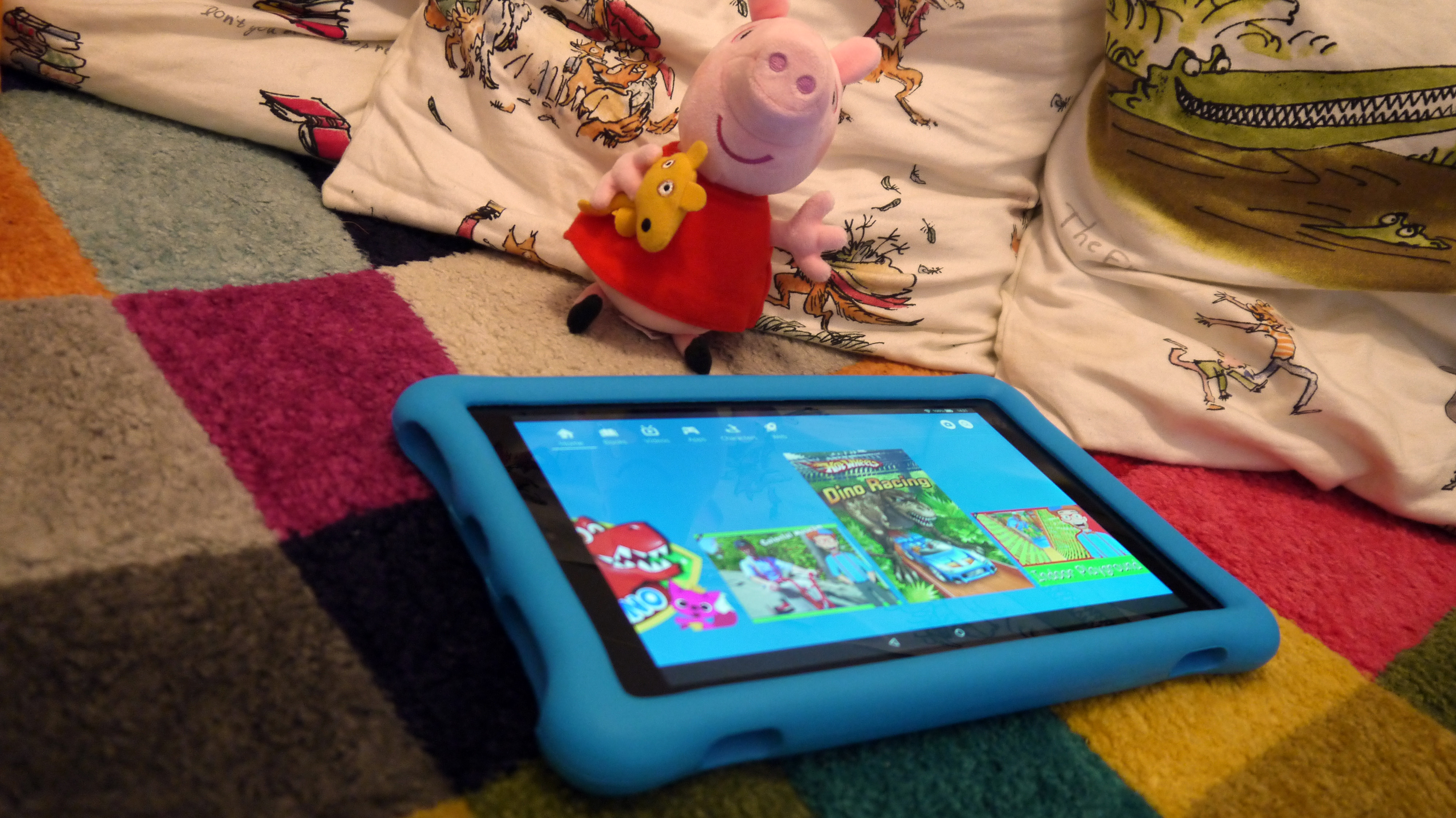 When it comes to watching content on the device, thankfully this is done by streaming, so it’s not everything you have to wait for.

The categories in the OS are easy to use and well laid out. We really liked the nice touch of having a Character category - this groups all content from a favorite character together.

The child-friendly web browser was fun, but not used that often. It’s good to have a safe place for kids to browse, but having so much available through the other categories, it just felt a little redundant for us. A nice touch, though, is that websites are shown as thumbnails, so it’s not that much different from the rest of the operating system.

When it comes to battery, the quoted 10 hours (eight if you are actually doing something of note with it) was a little off the mark. It was more like 6-7 hours, but it still kept its juice when it wasn’t in use.

The Amazon Fire HD 10 Kids Edition tablet is great fun to use, for both kids and adults. Amazon has really thought about the experience and has created a brilliant safe haven for children who are interested in technology.

The tablet’s software flourishes are innovative and scalable - depending on how much control you want. All of this comes at a price, though.

While you aren’t looking at iPad-style pricing here, £199/$199 is still a sizeable price for something aimed at children and while it’s brilliant there’s a year’s subscription of all-you-can-eat fun stuff, you will eventually have to pay.

As for the screen size, we’re still struggling to recommend it over the 7- or 8-inch versions. But, for kids that want that bigger screen, then they’ll get a whole load of enjoyment out of this slate.