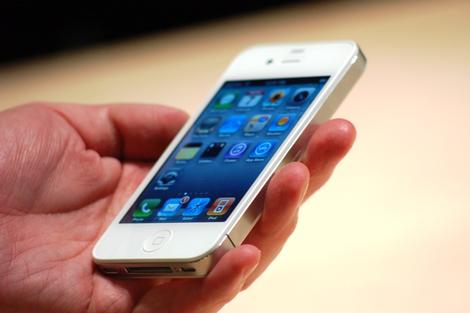 The iPhone 4S has been outed during Apple's latest press conference at its HQ in Cupertino, California.

And although there will be many disappointed with the lack of iPhone 5, it's not surprising that Apple has chosen to go down this route.

After all, this is exactly what it did with the iPhone 3GS, which in itself was a retread of the phenomenally successful iPhone 3G.

As per that refresh, we've got a beefed up model. The iPhone 4S has the A5 dual-core processor from the iPad 2, dual core graphics (like iPad 2, Apple is also claiming a 7x increase in graphics capability), 8 megapixel camera and 1GB of memory - the existing iPhone 4 makes do with 512MB.

The iPhone 4S UK release date is 14 October and as well as 16GB and 32GB versions there will also be a brand new 64GB model.

It's a seriously upgraded handset by any reckoning. The 3.5-inch retina display is retained as is the "metal band" design.

That last point is the shocker. Despite the fantastic looks of the existing iPhone case, Apple was widely expected to launch an iPhone 5 because of the previous problems with the handset. However, we expect Apple has been working hard with the new internals to ensure the problems aren't repeated.

The f2.4camera has 3264 x 2448 pixels - that's a total of 60 per cent more pixels over the iPhone 4's 5MP snapper. A Backside illumination feature means gather 73 per cent more light too. Taking pictures in low light should mean a lot less noise. Apple is finally catching up in terms of image quality,

There's also 1080p video recording as well as AirPlay mirroring to a TV while Apple also promises a 1.1 second start-to-shoot time for the camera.

The 4S can switch between its two antennas while on a call for improved call quality and it supports GSM and CDMA. There are also faster downloads-14.4mbp/s down - over HSDPA.

The new handset has 8 hours of 3G talk time and can also run 10 hours of video or 40 hours of music.

One group of people that will be happy are existing iPhone 4 customers. They don't have an outdated handset in terms of looks. Apple is clearly now working to a two year timetable with iPhones.

Over 250 million iOS devices have now been sold, with a billion new apps being downloaded every single month. That's some ecosystem.

Advanced voice control is also appearing but what we thought would be called Assistant is actually just called Siri. That's the name of the company Apple bought that is behind the technology. It's still in Beta. It'll read out lots of things including Notifications and texts and you can dictate to it too - which actually might be quite useful.

Aside from that last bit we're not so sure about the feature - Apple seems to think it will be big, but then it said that about FaceTime. When was the last time somebody you knew made a FaceTime call?

What we are sure about is that in iOS 5, Notifications look absolutely stunning. We can't wait to get our hands on the new OS. The iOS 5 UK release date is 12 October.The iPhone 4, iPhone 3GS, iPad and iPad 2plus iPod Touch third and fourth generation all get the update.