Android Nougat-Powered Galaxy A3 (2017) Pops Up On GFXBench

The Samsung Galaxy J3 (2017) has just surfaced on GFXBench, and it comes with Android 7.0 Nougat. This handset was originally announced back in January, along with its Galaxy A5 (2017) and Galaxy A7 (2017) siblings, though all of those devices were introduced with Android 6.0.1 Marshmallow. Well, it seems like the Android 7.0 Nougat update is coming to the Galaxy A3 (2017), if GFXBench is to be believed, of course. This probably means that the other two Galaxy A devices are about to get the update soon as well.

If you take a look at the provided image down below, you will get to see the GFXBench listing yourself. Every single spec that is listed here we already know, the Android 7.0 Nougat part is the only novelty here. We do not know when will Samsung release this update for the Galaxy A3 (2017), but it will probably land soon, will all the Nougat features might expect. We’ve already seen this update on some other Galaxy-branded smartphones thus far, and it brings the all-new notifications layout in the notification shade, some design changes, all-new Doze mode, and so on. That being said, the Galaxy A3 (2017) is the most affordable Galaxy A (2017) smartphone, and yet it comes with a solid spec sheet. This smartphone sports a 4.7-inch 720p (1280 x 720) Super AMOLED display, 2GB of RAM and 16GB of expandable storage. The device is fueled by the Exynos 7870 64-bit octa-core processor, and packs in a 2,350mAh battery on the inside, it’s also worth noting that its battery is not removable.

A 13-megapixel shooter (f/1.9 aperture) is placed on the back of this smartphone, and an 8-megapixel camera can be found on the phone’s front side. This handset comes with a front-facing physical home key which doubles as a fingerprint scanner, and a Type-C USB port is placed on the bottom of the device. That being said, you can read more about this smartphone by clicking here. Android 7.0 Nougat will land on the Galaxy A3 (2017) in the near future, and we’ll make sure to let you know once that happens, so stay tuned, chances are that the update will start rolling out soon. 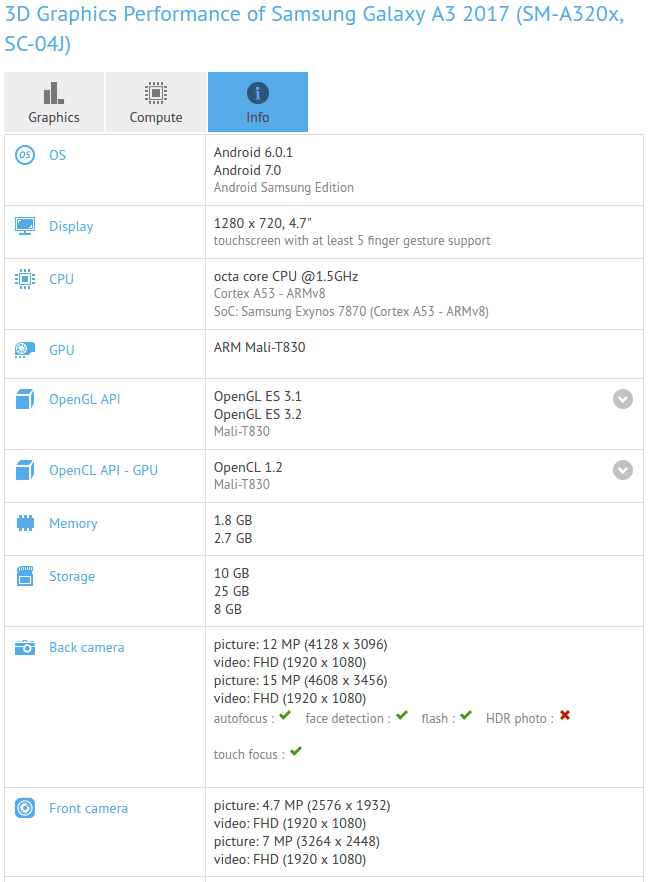 The post Android Nougat-Powered Galaxy A3 (2017) Pops Up On GFXBench appeared first on AndroidHeadlines.com |.