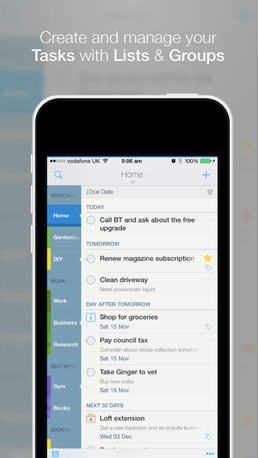 Powerful task management app 2Do is getting even better with yet another big update.

Version 3.2 is highlighted by a new Notification Center widget for iOS 8 devices. That will allow users to quickly and easily access their to-do lists without having to open up the app.

Heres the list of other new features in the update:

[NEW] Overhauled and re-written CalDAV support. Support for 3rd party CalDAV servers such as Fruux, SabreDAV, ownCloud, Oracle and more! Support in the Mac app for 3rd party servers coming soon.
[NEW] Much, much faster, more robust Reminders sync over CalDAV.
[NEW] Export tasks as CSV
[NEW] Focus filter for ‘In Progress’ tasks. Select this to immediately see only those tasks that have already started, due to an earlier start date or set duration that caused the task to appear in ‘Today’ before its due date.

A universal app designed for the iPhone/iPod touch and iPad/iPad mini, 2Do can be downloaded now on the App Store for $14.99.

Before todays changes, the last update to the app arrived back in early October. Version 3.1 was optimized for the higher resolution screens of the iPhone 6 and iPhone 6 Plus and brought an iOS 8 share extension.

Another big 2Do update arrives with an iOS 8 Notification Center widget and more is a story by AppAdvice.com
AppAdvice - iPhone, iPad, iPod, App Reviews + News
Get the latest tips & apps for your Smartphone