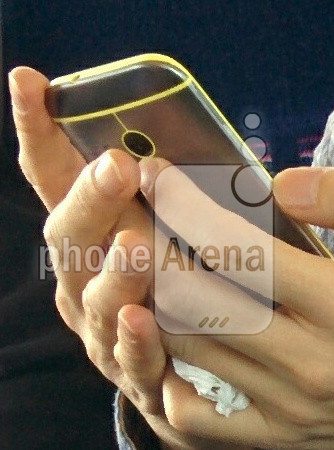 Just yesterday we shared with you a leaked press render of the upcoming HTC One (M8) Mini or HTC One Mini 2.  Today we have what could be our first “real life” picture of the miniature device!  The picture you see above was sent to PhoneArena by a ”source” who claims to have taken the picture of the device out in the wild.  Apparently, the individual holding the phone was likely a tester who clearly didn’t try very hard to hide the unannounced device.

One minor difference that you may notice in this picture, however, is the yellow accent on the inlays.  The press render did not show this extra colour so there’s no way in knowing whether or not the production models will get this same colourful treatment.  I for one think that the extra colour adds a little bit of character to the device but I’m sure others out there would prefer a more subtle black or white inlay.

Again, the rumoured specs for HTC’s new Mini include a 4.5-inch 720p screen, 1.4 GHz Quad-Core Snapdragon 400 Processor,  1GB of RAM, and 16GB of internal storage, microSD card slot, 13MP camera, and 5MP front camera.  It is also expected to run Android 4.4 KitKat out of the box with Sense 6.0 on top of that.

Another Look At The HTC One M8 Mini – This Time With Colourful Accents is a post from: Android in Canada Blog

The post Another Look At The HTC One M8 Mini – This Time With Colourful Accents appeared first on Android in Canada Blog.