The wll known KGI Securities analyst Ming Chi Kuo is at it again, revealing inside info from Apple, including the full product roadmap for 2014, something that the Cupertino giant probably won’t dig. Anyway, Kuo is saying that Apple will launch its first new product of the year in the second quarter. 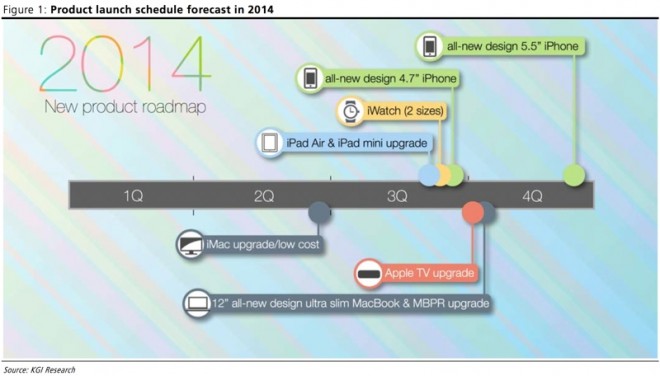 That’s supposed to be a lower cost iMac and to follow it are the famous iWatch, in two versions. One will be a 1.3 incher and the other a 1.5 incher with flexible AMOLED display. Sapphire cover lens, biometric recognition, NFC, wireless charging and a slim design will also be part of this product. In the roadmap we also find the iPhone 6 in a 4.7 inch version and a 5.5 inch phablet version, plus the iPad Air 2, expected to come with Touch ID and the Apple A8 CPU.

It will also include a more powerful back camera, with an 8 megapixel resolution. Then there’s the new iPad Mini Retina with an A8 CPU, Touch ID and the same form factor. Finally, there’s a 12 inch MacBook Air with a higher resolution display, a new Apple TV and the iPad Pro with a 12.9 inch screen, that may not make it this year and get launched in 2015 instead.