Mac Rumors Sep 13,  2013
Eric Slivka Sep 13,  2013 Read Source
Sep 13,  2013
Read Source
At its media event earlier this week, Apple noted that it had increased the battery capacity of the iPhone 5c relative to the iPhone 5, and the company's tech specs show that users can expect longer for battery life on both the iPhone 5s and 5c for certain tasks.

In particular, both new iPhones offer up to 10 hours of talk time on 3G and the same 10 hours of LTE Internet use, up from 8 hours for both tasks on the iPhone 5. Standby time on the two new models has also increased to up to 250 hours compared to 225 hours on the iPhone 5.

While I'm somewhat skeptical sometimes of the accuracy of battery capacities as reported in FCC disclosures (which I noted about the battery size for the Nexus 5), these numbers seem credible given what I've heard, the statement Apple made during the keynote about the 5C battery size going up, and what I'd expect with some board re-layout for the 5S.

The iPhone 5s number reported in the FCC documents is close but not identical to what was seen on a leaked December 2012 prototype. The battery in that device was listed as 5.92 Whr, while the FCC documents report a capacity of 5.96 Whr. 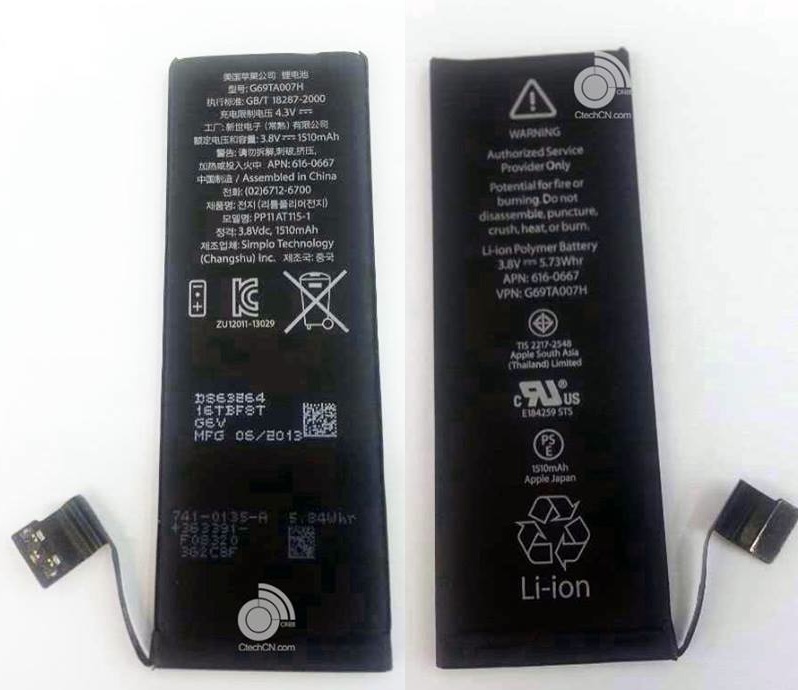 The documents report a capacity of 5.73 Whr for the iPhone 5c battery, which matches that seen in photos of the part posted by C Technology today.