Mac Rumors Oct 23,  2013
Juli Clover Oct 23,  2013 Read Source
Oct 23,  2013
Read Source
Apple today announced its second-generation iPad mini, which, as expected, is equipped with a 7.9-inch Retina display with a resolution of 2048x1536, matching the resolution of the full-sized Retina iPad. The Retina iPad mini retains the same form factor as the original iPad mini, measuring in at 7.2 millimeters and weighing 0.68 pounds. It is available in both white and space gray. 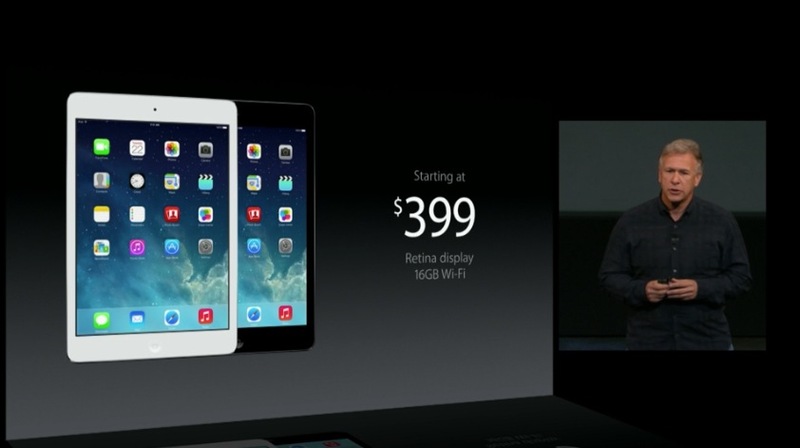 Internally, the Retina iPad mini includes a 64-bit A7 processor, M7 motion co-processor, and an upgraded 5-megapixel rear iSight camera with a backside illumination sensor and 1080p HD video capability. Meanwhile, the front of the device now features a new FaceTime HD camera with larger pixels that is also accompanied by dual microphones. The new iPad mini also now features multiple-input and multiple-output (MIMO) technology that offers up to 2x faster Wi-Fi, with both 802.11a/b/g/n Wi-Fi and LTE cellular models that available with up to 10 hours of battery life.

Apple has raised the price of the iPad with the inclusion of a Retina screen, and will continue to offer it in 16, 32, and 64 GB models, beginning at $399 in the United States.

In addition to offering the Retina iPad mini, Apple will continue to sell the existing iPad mini at a lower price, beginning at $299.

Apple will begin accepting pre-orders for the new iPad mini in November.