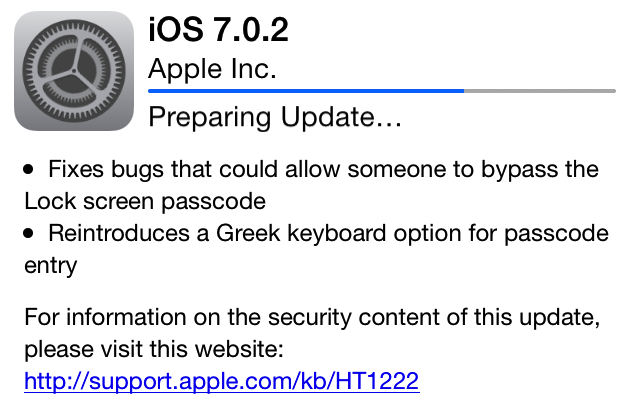 Apple has just released iOS 7.0.2, a minor patch for the iOS 7 update that was made available to the general public a bit less than a week ago. The update appears to fix two lock screen bugs we've previously reported on: one that allows access to an iOS device's Photos app (and, by extension, its Contacts list and some other information) and one that allows calls to any number to be made from the Emergency Call screen. We were able to reproduce both bugs in iOS 7.0 and 7.0.1, but neither exploit worked in iOS 7.0.2 on our iPhone 5S.

iOS 7.0.2 also allows the use of the Greek keyboard on the passcode screen, a feature which was apparently available in iOS versions prior to iOS 7.0. Unlike the iOS 7.0.1 update (which applied only to the new iPhone 5C and 5S), the 7.0.2 update is available to all devices that support iOS 7. That list includes the iPhones 4, 4S, 5, 5C, and 5S; the iPad 2, iPad mini, and both Retina iPads; and the fifth-generation iPod touch. The update can now be downloaded over-the-air or applied via iTunes.