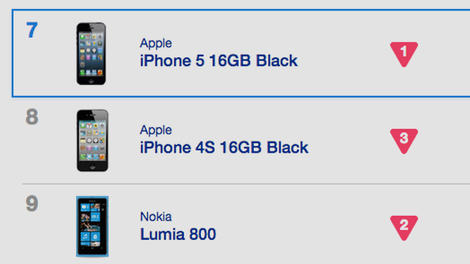 Apple's iPhone 5 was only the seventh best-selling handset in the UK last month, according to new data from price comparison website uSwitch.

In another surprising turn, Nokia's Symbian-based Nokia 100 and C2-01 were in fourth and fifth place, ahead of the Windows Phone-running Lumia 800 and 610 - which were eighth and ninth respectively.

Apple on the slide?

Although it's no surprise that the iPhone 5, third in the list when it launched in October, was apparently outsold by the all-conquering Galaxy S3 in January.

However, seeing the iOS device so far down the list and being outsold by the 2-year-old Galaxy S2 and budget Nokia Symbian devices does come as a little bit of a shock.

According to the data, the iPhone 4S has also experienced a big drop off in the last couple of months. Back in October, the handset was the second best seller in the UK and even in December it finished fifth. In January, it had fallen to tenth spot.

"The UK's loyalty to brand Samsung is unwavering, but beyond that we've seen customers shaking-up the rankings, leaving Apple's 4S for dust in favour of offerings from LG and Nokia," said Ernest Doku, telecoms expert at uSwitch.