Apple is quickly reacting to the feedback of customers, by launching an extended repair program for its Smart Keyboard accessories for the iPad Pro. It would appear that some people are unhappy with the iPad Pro attachable keyboard and this prompted the longer period of repairs.

The new policy, which was revealed in an internal memo dated May 5th shows that Apple will extend the standard warranty on select Smart keyboards for the iPad Pro 9.7 and 12.9 models. Issues with the products have been found by some users, including sticky or non responding keys, sensor/connector problems or issues with connecting the keyboards to the iPad Pros. 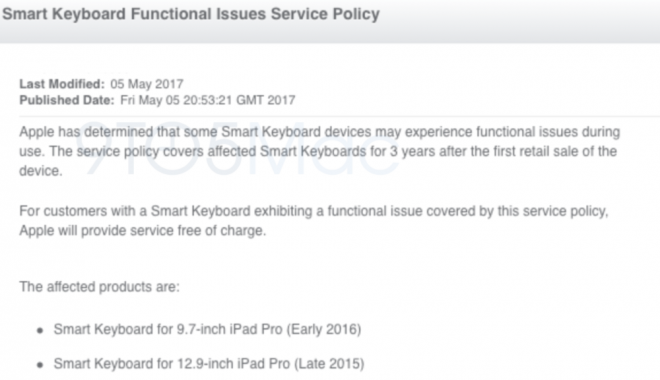 If one runs into such trouble, the best thing is to take the keyboard to a Genius Bar for fixing, at the local Apple Store. Or there’s Apple Support to contact via phone or email. The extension means that all troubles found for 3 years after the original retail date mean free servicing. Refunds are also available, for those who want that.

So, the inevitable question is here: do you have such an accessory? Is it working OK for you?