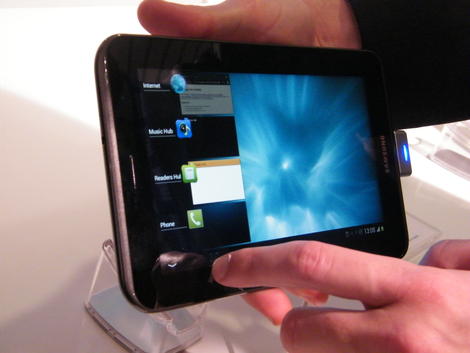 Apple unveiled its new iPad today at an event in San Francisco, which isn't much of a surprise – but the fact that it felt it needed to mock Samsung for its Galaxy Tab line-up is.

In his keynote about the new iPad, Tim Cook compared a number of apps on the Samsung Galaxy Tab with what they looked like on an iPad.

Speaking about the differences in quality of the official Twitter app, Cook said: "It kind of looks like a​ blown-up smartphone app running on a tablet -- and that's exactly what it is!"

When showing off Yelp, he noted: "Lots of whitespace, tiny text. It's kind of hard to see."

Samsung and Apple have had one of the most public spats in the history of technology and it looks like this is one which is going to run and run.

Samsung has done a pretty good job of mocking Apple through its recent spate of adverts and it seems this has actually got to the usually cool Apple.

It was a bit of a road bump in the keynote, given that Apple's hardware and its new iPad should speak for itself.

This is the same Apple which is trouncing the opposition when it comes to tablet sales.

For Samsung this can only be a good thing – sales wise it may be well behind, but it has niggled Apple and Cook used the new iPad's announcement to bad mouth a rival.