Apple steals video from filmmaker, Nokia gifts them a Lumia 1020 encouraging them to ‘stay original’ 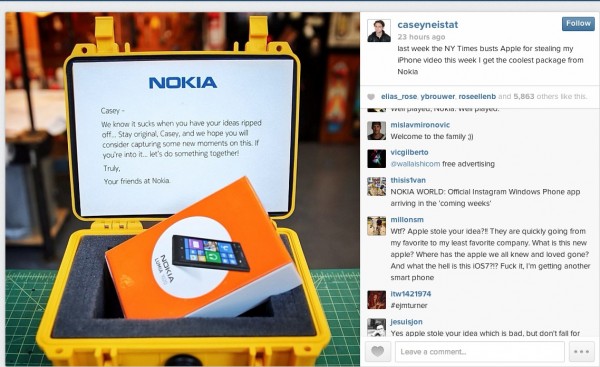 Remember that picture with those different sized cases? Inside one seems to be a Nokia Lumia 1020 which was sent to Casey Neistat. He recorded a video with his iPhone which Apple used, but removed his name without permission.

Apple was busted on NYTimes for this. Nokia, as a kind gesture (and good social media move) gave him a Nokia Lumia 1020. Well if it’s worth taking a video, why not with a 1020?

“I’ve never had my work stolen so adversely as this,” Mr. Neistat said. “They stripped all my branding off it and put their own name on it in such a harsh way.”

last week Apple steals my iPhone video http://t.co/IcviJdazy3 this week i get this radical package from Nokia –> http://t.co/VrSppbBDqI

Apple is famously quoted for “Good artists copy, Great artists steal” originally by Picasso but more famously associated with Steve Jobs. Steve hated Android for copying Android and wanted to annihilate it, but iOS has so much copied from everywhere too. It’s a cycle of life where one inspires another (Sammy is the best at getting inspiration from others). Nokia’s had a lot of inspiration at Apple too (though we won’t go there).