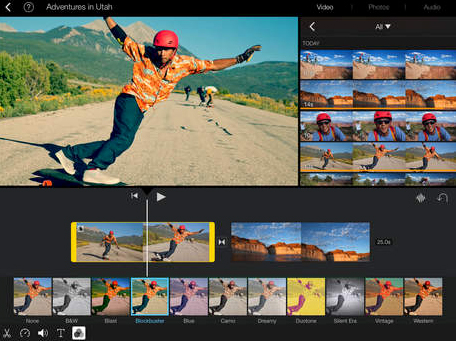 Apple has updated a number of its iOS apps today. Most notably, iMovie has made the move to version 2.1.1.

Arriving in iOS 8.1, iCloud Photo Library allows users to store their images on the cloud storage service and access them from any iOS device or any Mac with OS X Yosemite.

Along with general performance and stability improvements, the update also resolves an issue that could occur when rotating a device while in the video browser.

Before todays improvements, iMovie was last updated in mid-September right after the introduction of iOS 8. Along with support for the latest version of iOS, it ushered in 10 Apple-designed filters to use on a video, and more.

For other recent app news and reviews, see: Get the most retro platformer experience on iOS with 1-Bit Hero, Clash with the Viking clan in Adult Swim’s Day of the Viking, and Pokemon TCG Online for iPad updated with XYPhantom Forces expansion.

Apple updates iMovie for iOS with support for iCloud Photo Library is a story by AppAdvice.com
AppAdvice - iPhone, iPad, iPod, App Reviews + News
Get the latest tips & apps for your Smartphone