Apple's Newest iPhone Will Arrive Sooner Than You Think 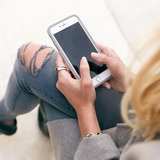 Apple fans, get your calendars ready: the company's newest iPhone, iPads, and even a brand-new Apple TV are expected to be announced at an event the week of Sept. 7.

The rumors come from John Paczkowski, a reporter at BuzzFeed whose sources on this type of information have been right in the past. The iPhone 6s will finally become a real product, though there really won't be too much of a difference externally. However, the iPhone 6s will include several updates internally, with a longer battery life and refined camera and include force-touch technology.

While it's always exciting to see a new iPhone, you might want to get excited about two other possible debuts: a 12.9-inch iPad Pro and a new Apple TV. Though there aren't too many details on either device, other than the larger size of the iPad and that this will be an improved Apple TV, it's still something to look forward to. Even better, the event is barely a month away - enough time to get superpumped about these fresh products.