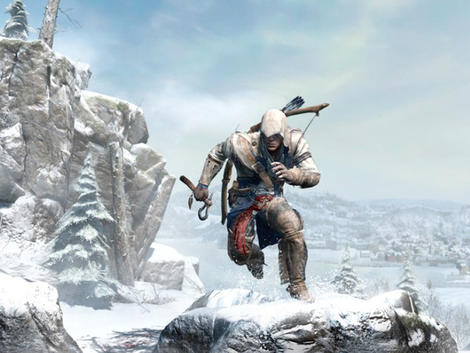 Following a host of carefully orchestrated leaks, Ubisoft has released the first official details for the long-awaited Assassin's Creed 3.

The company has sent out the first official trailer for the game, which will launch on October 31st on Xbox 360, PS3 and PC.

An interesting subtext amid all the excitement is the announcement that the game will also launch on the forthcoming Nintendo Wii U console.

It's the first game to be officially confirmed for Ninty's next-gen offering.

The company has announced that the game will be led by a new protagonist, a warrior of English and Native American descent called Ratohnhaké:ton, who'll go by the much-simpler nickname of Connor.

In terms of plot the game, which Ubisoft says is three years in the making, will take place around the time of the American revolution.

The developer says the game "spans the Revolutionary War, taking gamers from the vibrant, untamed frontier to bustling colonial towns and the intense, chaotic battlefields where George Washington's Continental Army clashed with the imposing British Army."

The official launch follows the regular drip of information, leaked out over the last week. A micro site revealed the official title, while cover artwork and screenshots also appeared online.

Check out the official trailer below.