The ASUS MeMo Pad 8 and Toshiba Encore 8 inch tablets have been made available for preorder in Europe and in spite of sharing the same diagonal size, the two devices are pretty different. The ASUS model appeared at IFA 2013, while the Toshiba unit was shown at IDF 2013. 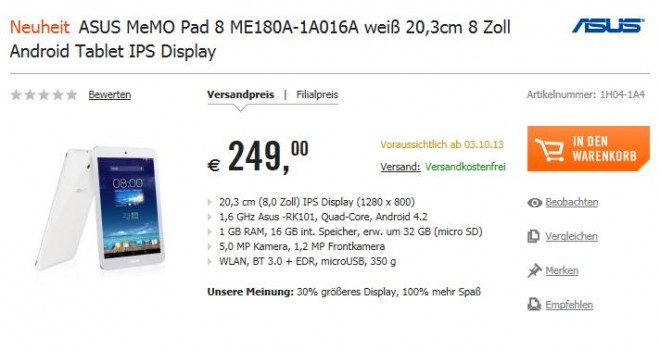 Toshiba Encore is priced at 299 euros on Amazon.de, while the ASUS MeMo Pad 8 costs less, at 249 euros on Cyberport.de. The Encore is a Windows 8.1 slate with an 8 inch screen and preinstalled Office 2013 Home & Student. Inside we find an Intel Atom Bay Trail CPU, plus 2 GB of RAM and 32 GB of storage. There will also be a 64 GB version priced at 349 euros.

We get GPS, a HDMI port, microSD card slot and an 8 megapixel camera on board as well. Meanwhile, the ASUS unit runs Android 4.2 and offers 16 GB of storage, a quad core MediaTek 1.6 GHz chipset, 1 GB of RAM, WiFi, Bluetooth and a 5 MP back camera. We’ve also got a 1.2 MP front shooter and this model comes in 3 colors: white, gray and black.