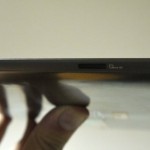 The ASUS Transformer Prime was just announced this week as the first Android device to sport a Quad-Core processor, courtesy of NVIDIA’s brand new Tegra 3 processor. It’s safe to say that the hybrid tablet/laptop will attract it’s fair share of attention on launch thanks to it’s interesting form factor, cutting edge processor and inherently speed, adn the ultra-slim and sexy design (8.33mm thick).

We already knew the device would be offered at $499 for the 32 GB version and $599 for the 64GB version with the keyboard as an optional accessory, but this hands-on identifies a sale date somewhere between January and March, most likely March if the translation is good.

Here is a quick demo of ShadowGun being played on the Transformer Prime:

For more details and a boat load of pictures, hit up ZTOP [via Engadget].