Asus recently unveiled the Zenfone Live smartphone in India, which was being teased days before its launch with hashtag #GoLive. It is being touted as the world’s first smartphone with real-time beautification technology for live-streaming.

Asus Zenfone Live comes with company’s unique hardware optimised for live beautification app named BeautyLive that fixes blemishes and beautifies the face in real time. It does not have the best hardware in its segment but the smartphone is unique in its own way, which might be one small reason to consider the smartphone over its competitors.

The growing trend of live videos has took over the conventional medium for mass connect. Sensing the emergence of the medium, Asus has become the first one to add a flavour to the live streaming trend. Looking at the overall offering, the Live feature feels gimmicky for the price it comes for. So if you are not confident about your looks and want to add up artificial beautification while live streaming, then this can help you.

I have been playing with the Zenfone Live from few days now, and here is what I have learnt after experiencing the device.

The smartphone comes with a 5-inch IPS LCD display with HD (720p) resolution. The display gets pretty bright in outdoors, which I feel is the best thing about this display. It can be viewed from extreme angles even in bright lighting conditions.

Apart from this, the display doesn't produce the best colours, and looks slightly dull when compared to competing smartphones in the category. Still, Asus has given an option to tweak the colour tones in the display settings, but it’s not that effective.

The display has a black border on the sides, which looks slightly odd considering the level we have reached in a smartphone design. I would not call it a bad display but it is not an outstanding display either. It doesn’t look very crisp and punchy, but still gets the job done. 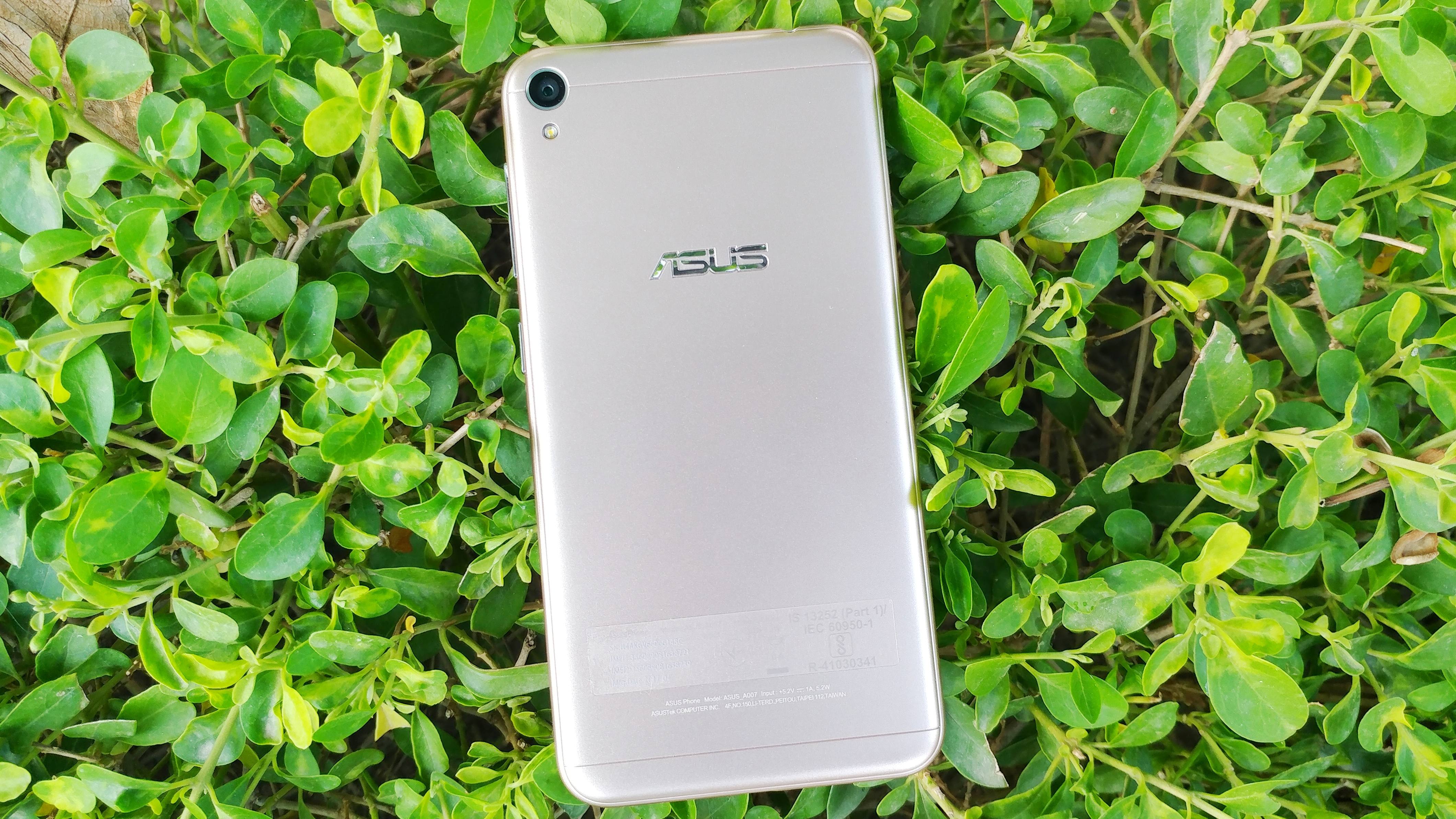 The Zenfone Live has a typical iPhone like design, and it’s something that’s already seen on many other phones. But that doesn’t mean the phone looks bad or ugly in anyway, it has a very handy and lightweight design, which seems perfect for one handed usage. Unlike many phones in this range, it has a plastic build, which Asus says has a metallic finish on top. The rim surrounding the edges is made up of sturdy metal and has a rounded finish for better in hand feel.

On the front, it has a 2.5D curved glass to give it a seamless in-hand feel. Asus has incorporated the capacitive navigation keys at the bottom bezel, but sadly they aren’t backlit. Volume rocker and power/lock key is on the right that offer tactile feedback. You can also double tap the volume rocker to open up the camera from the lock screen. SIM tray is on the left, 3.5mm audio jack is at the top, while the loudspeaker grill and micro USB port reside at the bottom.

The camera module is baked on the top left corner along with a LED flash right below it. Being a live stream centric smartphone, having a front LED flash is pretty evident.

The best thing about the design is its thinness and light weight. It weighs just 120 grams and is 8mm thick. And the biggest downside is the absence of a fingerprint sensor, which is now a norm on most smartphones these days.

The Asus Zenfone Live runs on Android 6.0 Marshmallow with company’s own Zen UI on top. Honestly, I am not a fan of custom UIs but most of the OEMs have started streamlining their custom software after realising consumer’s inclination towards lighter softwares. Asus has worked on optimisation but the icon pack, quick settings panel, and settings menu still look flashy, which is liked and disliked depending on personal choice. 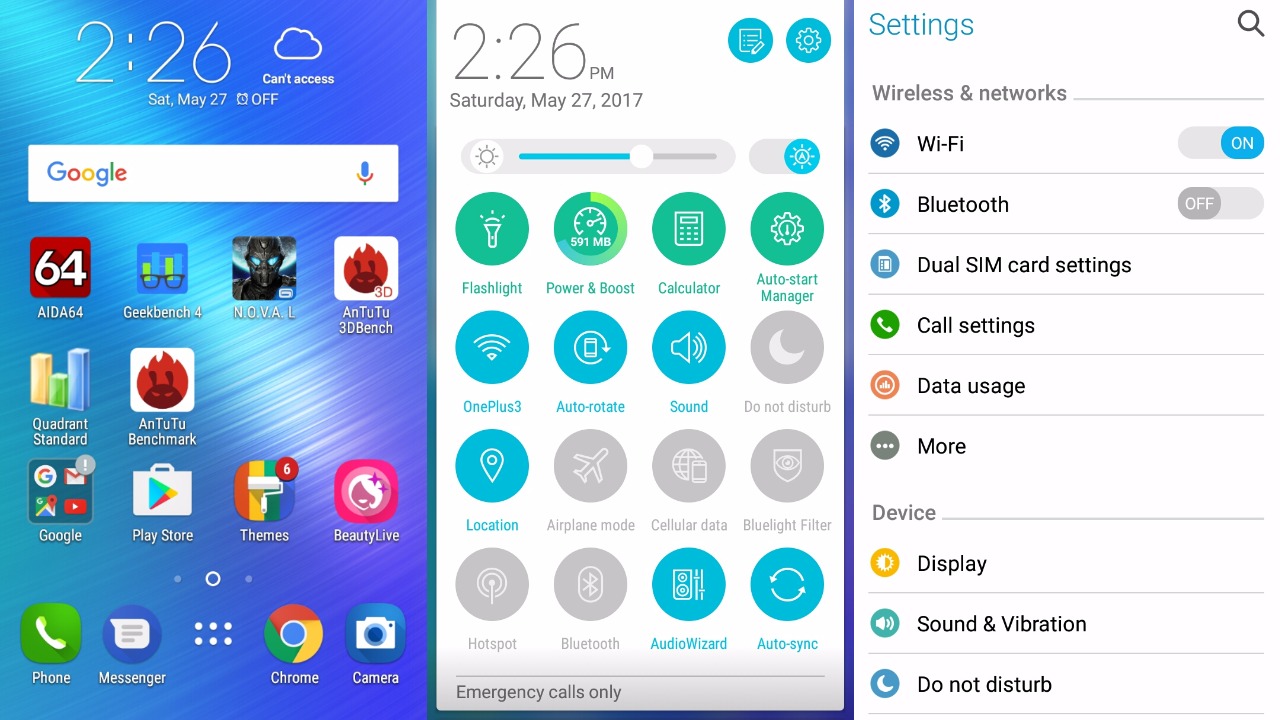 It comes pre-loaded with several bloatware apps, out of which, only few come to practical usage. The sad part is that you can’t remove these apps, instead you can disable them in the settings. If you prefer personal customisation, then this UI may be a decent choice for you. The animations and transitions are smooth but you might notice it slowing down after prolonged usage.

You get apps like Facebook, Messenger and Instagram apps pre-loaded, which is a good thing for those who want to save some MBs while setting up the phone.

It has several system optimization apps running in the background that gets annoying as it keeps sending out stats that most of us don’t use. I wish the UI felt as light as the smartphone itself.

At Rs. 9,999, the Zenfone Live serves you with a not-so-impressive set of hardware. It is powered by a Qualcomm Snapdragon 400 processor coupled with 2GB of RAM and 16GB of internal storage, which is expandable via microSD up to 128GB. Out of 16GB of storage, only 10GB is available at user end, while rest is pre-occupied by system.

SD 400 is a processor from the past, which will obviously leave you asking for something extra. However, it can easily make up to basic tasks like calling, texting, listening to music or watching videos. If you plan to play games on this smartphone, you better rethink once again.

In my case, I tried playing NOVA Legacy, which most other phones at around Rs. 10K can handle. It started off pretty smooth but I could see immediate frame drops where there was too much action on the screen.

Long story short, this phone is not for aggressive users. To get a better idea, you can check out the disappointing benchmark scores below. 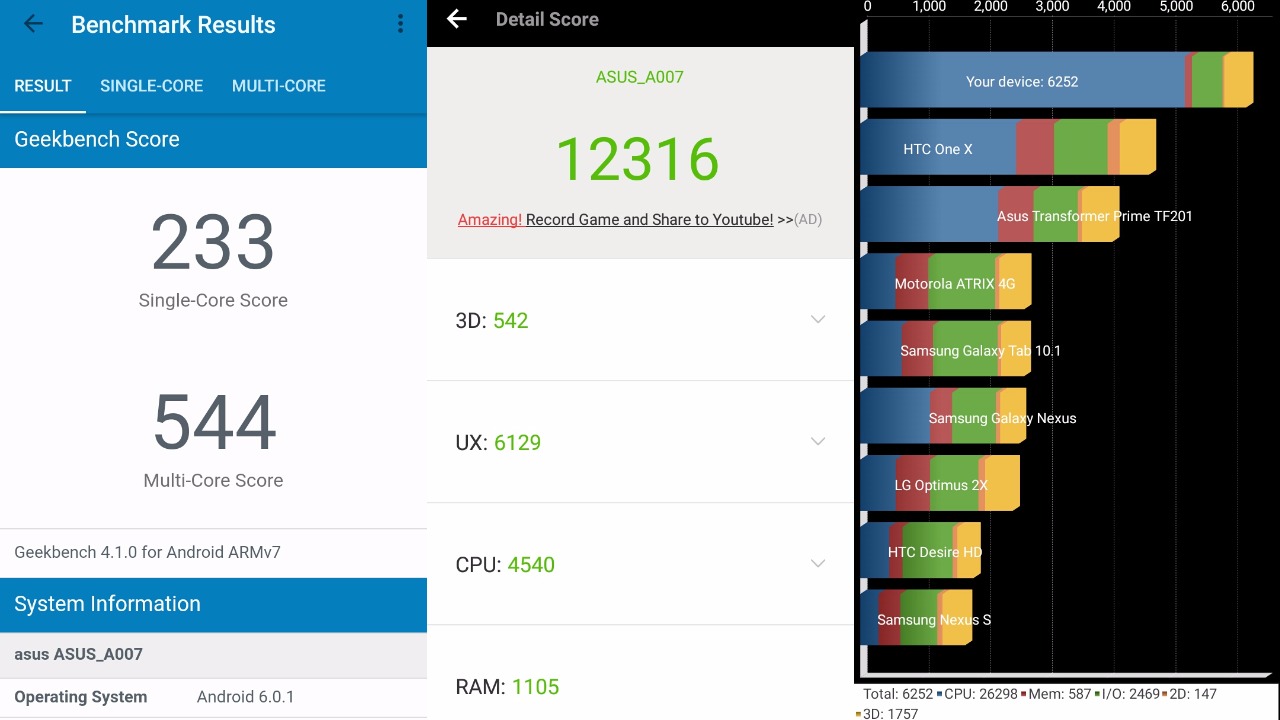 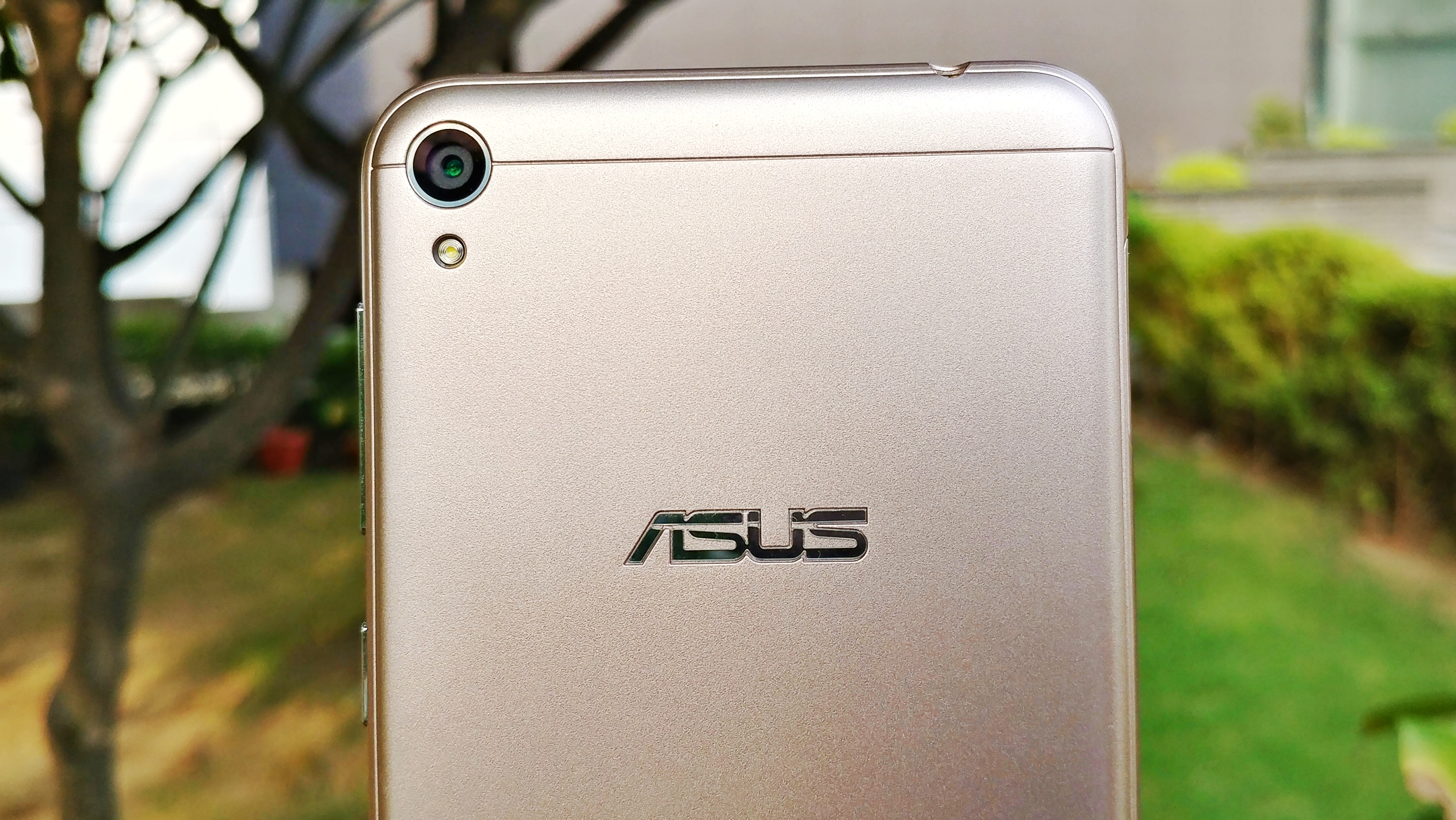 The rear camera captures good details and colours in natural light that looks relatable to the original object. I just realised it does too much of software processing to make your pictures look the best, but sometimes it fails. When I moved to indoors, the camera interface showed lags right from the beginning, all thanks to the heavy camera software.

Clicking a moving object using this phone is not recommended at all, no matter in which lighting condition you are. It’s not that the autofocus is slow, but the shutter lag makes it difficult to take a clear shot. Also, when you zoom into the photos (except for some natural light photos) you will notice harsh pixelation on dim light shots. 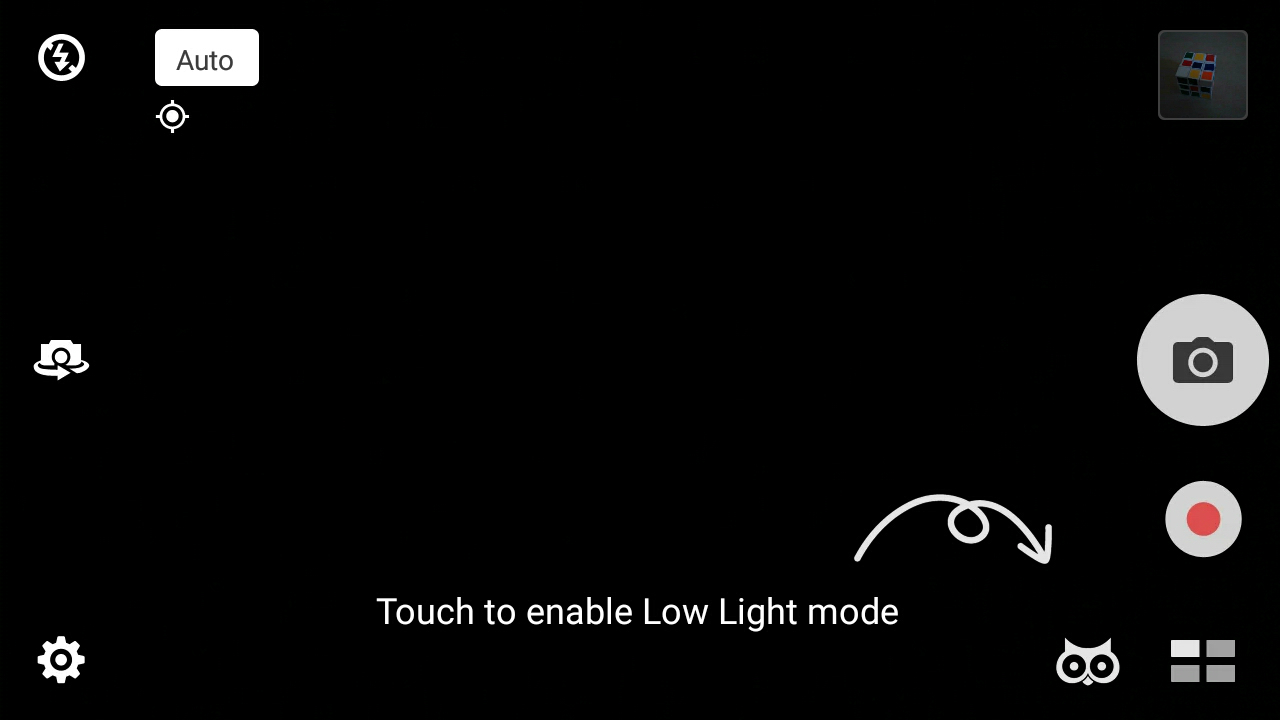 I really liked the fact that Asus tries hard to put some sense to the given modes. For example, I went to the ‘Children’ mode which automatically clicks a picture when a baby's face is detected. This is not it, the mode has pre-loaded sounds of chicken, trumpet, piano, bird and more to play and grab child’s attention towards the camera. So you just tap on the sound and the phone will automatically click a picture when the baby looks at the camera.

The Zenfone Live comes with a mono 5-magnet loudspeaker. The loudspeaker grill is at the bottom which has a fairly loud volume but with slight distortion at high tones. It sounds similar to most other phones at this price or lower. On top of this, it comes with a pair of MEMS microphones to send clearer noise during video calls.

All the calls made with the smartphone are fine and I didn’t face any issue with network reception.

The ZenFone Live is backed by a 2,650mAh battery. I was using it as my secondary device and used it for calling, surfing internet, checking social media feeds and music.

For a basic tasks, this phone can last for up to 7-8 hours, whereas aggressive users may get around 4-5 hours of backup if you ave a habit of fiddling with your phone continuously.

I really liked the standby battery performance, as I found it draining almost no battery even after hours of inactivity.

During our test, the phone took around 2 hours and 15 minutes to get charged from 0-100.

Asus overlooked the conventions and tried something new on this phone. Many will call it a marketing gimmick and a needless feature, but I always appreciate every effort aimed at innovation. This may not be the best implementation of this feature, but this will give a head start to upcoming features focused to aid live streaming. 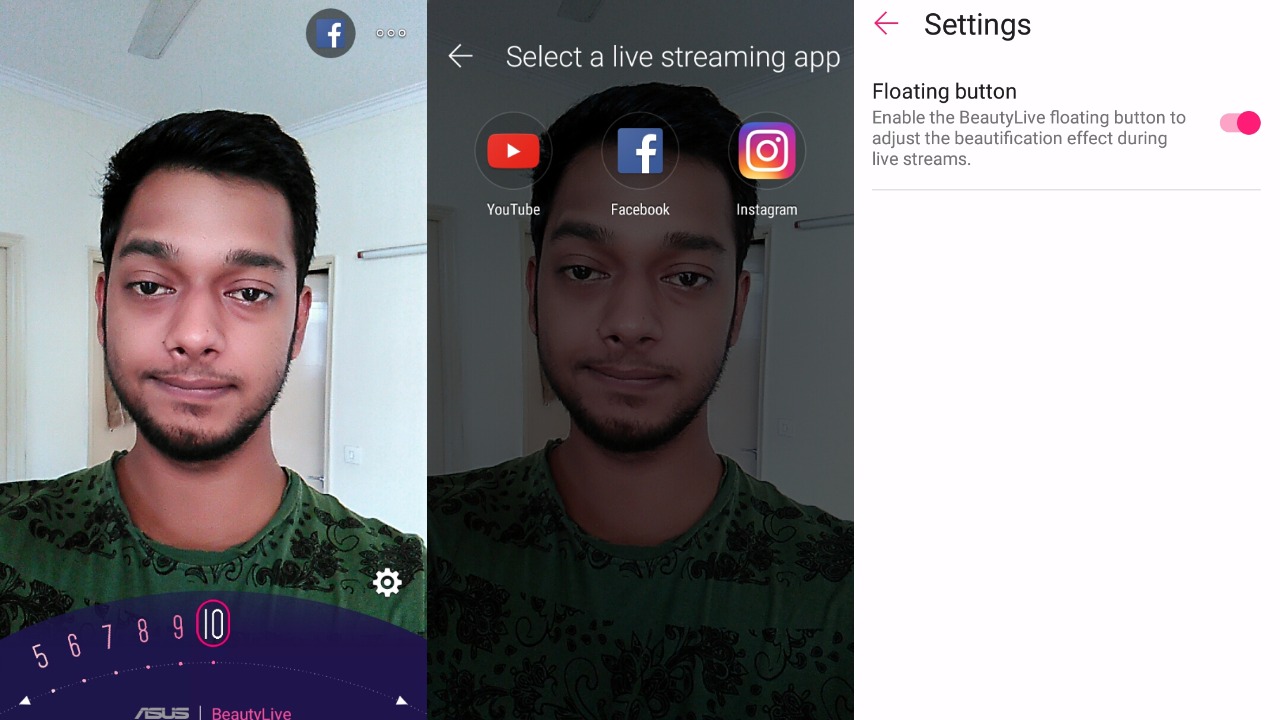 It is very easy to use, you just have to launch BeautyLive app and set the beauty level between 0-10. Select a live streaming app between Facebook, Instagram and YouTube to start a live stream with the beauty mode on.

I agree with the fact that live beautification is not the need of the hour, and I feel Asus should have installed decent set of hardware to back the experiment.

One thing that I liked on this device is the step counter. Zenfone Live comes with ASUS ZenFit app that keeps a track of your daily activity with the help of a pedometer. It’s not that accurate, but still a nifty feature to have.

Overall, the Asus Zenfone Live is not the best you can get for Rs. 9,999. The lightweight and compact design inclusive of a pedometer is on the bright side, while there is nothing else that excites us about the device.

No doubt the real-time beautification is a unique feature for live streaming, but the hardware of the smartphone is rather disappointing. If Asus would have tried to trim down the UI and incorporated at least a Snapdragon 430 on this device, things would have been much better.

In a nutshell, I would recommend you to go for either Xiaomi Redmi 4 or Lenovo K6 Power at this price point.