Aurora AppLock Quick Review: Here’s What You Should Know

App locks for Android are in great demand. There’s a simple reason for that and we already know it – Privacy & Security. If you look at the Google Play Store, there’s a whole bunch of app lockers. If you want to manually evaluate all those apps and decide for yourself, you’ll probably be wasting your time. Well, not to brag, but that’s why we are here, to make things easier for you. So, we’ve put another Applocker to our review bucket list – Aurora AppLock. If you are already using one, we would still recommend trying it out (never know, you may ditch the previous!). In this review, we would highlight everything you need to know about the app locker.

Well, even if the smartphones are coming packed with larger internal storage options, you would have to still worry about the storage. Every inch of storage counts when you realize that you don’t have much free space left. So, why not prevent it from happening? You could easily do that by installing lighter applications (less size).

Here, the application is of mere 3.4 MB in size. And, upon installation, it takes around 15 MB of space. 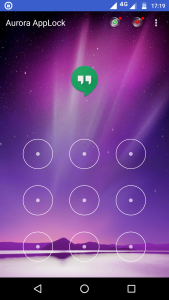 Aurora comes with a pretty decent user interface. However, simplicity doesn’t really ruin your experience with it, the reason behind it is – no annoying in-app advertisements. Although, it asks regularly to either submit a complaint or to rate it at the Play Store. But, that’s pretty much to it. You’ll have to once rate the app to make it disappear.

The transparent status bar appeared to have a different color than the default accent color of the app. It could be probably fixed with a simple code modification from the developers end. 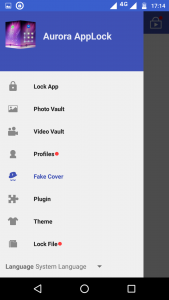 Looking at the size, and the screenshots offered at the Play Store, you’ll probably be thinking that this app is meant just for putting a pattern lock to secure apps. However, it offers a plethora of features like Photo Vault, Video Vault, Intruder alerts, Fake cover and another interesting chameleon inspired feature.

It lets you customize the look by supporting multiple trending themes. Nothing fancy, but simple customization options. The themes look really nice, you would definitely find one that suits your taste.

Battery consumption is one of the most important factors while reviewing an app. Fortunately, there was no visible additional battery drain. So, yeah! It’s battery friendly indeed!

It’s overall a nice app locker to have installed on your device. It comes with a handful of features which won’t make you install other privacy protection apps to secure your files. If you’re a material design lover, the UI may be a problem. But, otherwise, simplicity is the best and this app provides it with ease and no hidden strategies of making money out of a user. That’s something rare to find!