Through the Fire (The Native American Warrior Series) 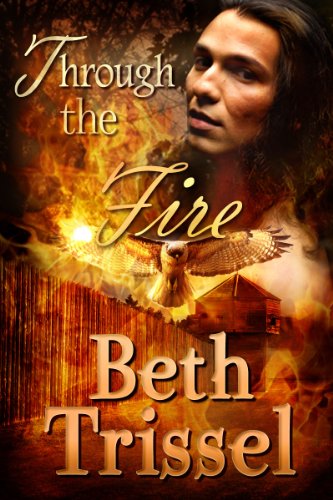 Passions run deep in the raging battle to possess a continent, its wealth and furs. Both the French and English count powerful Indian tribes as their allies. English lady Rebecca Elliot, having eloped to America with a British captain, finds herself a widow. When she ventures into the colonial frontier with the militia to seek her uncle, she unwittingly enters a dangerous world of rugged mountains, wild animals, and even wilder men. The rules are different here and she doesn’t know them, especially those of the savagely handsome warrior who captures her body and her heart.Half-Shawnee, half-French warrior Shoka, former guide for English traders, is the hawk, swift, sure, and silent as the moon. He knows all about survival in this untamed land and how deadly distraction can be. His intent is to sell Rebecca to the French before she draws him under her spell, but if he lets her go he can no longer protect her. If he holds onto her, can he safeguard his heart? With battle looming and an enemy warrior bent on vengeance, Shoka and Rebecca must decide whether to fight together or be destroyed.~

(Kira, Daughter of the Moon is the sequel to Through the Fire)
Review
“Through the Fire is full of interesting characters, beautifully described scenery, and vivid action sequences. It is a must read for any fan of historical romance.” ~Poinsettia, for Long and Short Reviews
From The Author

When I wrote award-winning Native American historical romance novel Through the Fire I felt as though I’d been through the flames. My hero and heroine certainly had. Set at the height of The French and Indian War, this adventure romance with a strong The Last of the Mohicans flavor was born in the fertile ground of my imagination, fed by years of research, and a powerful draw to my English/Scots-Irish roots. My fascination with stirring tales of the colonial frontier and Eastern Woodland Indians is an early and abiding one. My ancestors had family members killed and captured by Native Americans. Some individuals returned with intriguing accounts of their captivity while others disappeared without a trace.

Through the Fire is Book Two in my Native American Warrior Series. The series loosely ties together based more on time and place and strong Native American characters than as a traditional series that follows the storyline. However, Kira, Daughter of the Moon is the actual sequel to Through the Fire, and there will be other sequels. In addition to Native Americans, hardy Scots-Irish frontiersmen and women, colonial Englishmen and ladies, and even a few Frenchmen also play an important role in this series. So far, it spans the gamut from the dramatic era of the French and Indian War, through Pontiac’s War, The American Revolution and shortly thereafter. But that time period may broaden as more stories are added to this line.