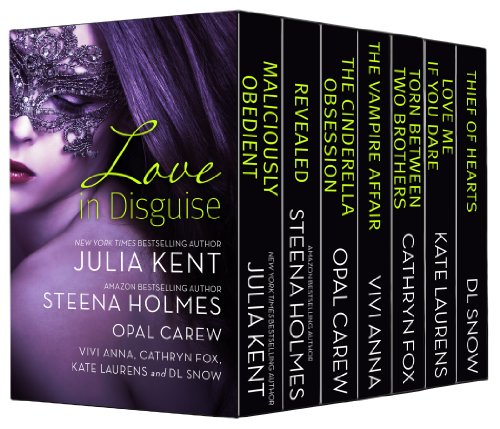 The following four, well-reviewed, Romance Kindle box sets are currently priced at just 99 cents each! Prices are subject to change at any time, so don’t hesitate to pick these up:

Secrets. Masks. Mistaken identity. Fantasies. Past mistakes. Love in Disguise brings you SEVEN BOOKS from seven authors (including New York Times and Amazon bestsellers) who know how to bring passion to the page, with heroes who don’t let what’s under the surface stop them from getting the women they desperately want…

Maliciously Obedient by Julia Kent – One playboy CEO. One curvy, determined administrative assistant. One hidden camera. What could go wrong?

Revealed by Steena Holmes – One moment of passion at the hands of a sexy masked man is about to crumble Eve’s dream of becoming a success as a pastry chef. Will she bury her desire for love or will she look beyond the mask to find the man who ignites a fire in her soul?

The Cinderella Obsession by Opal Carew (writing as Amber Carew) – Can Vanessa risk falling in love with a man obsessed with a fantasy woman — even though that woman is her?

The Vampire Affair by Vivi Anna – An unconventional journalist risks everything including her job to get the goods on billionaire businessman Jonathan Devane, a man who enthralled her for a single passionate kiss months prior, a man who makes her blood race, a man with dark secrets…

Love Me If You Dare by Kate Laurens – It’s been three years since Kaylee Sawyer has been home–home to the alcoholic mother she can’t handle, home to the painful memories of her sister Ella… and home to the guilt she’s carried for years. About to enter her final year of college, she is determined to come to terms with the mess of her past–and to ignore Dylan McKay, the guy whose single kiss has been tattooed into her mind forever.

Thief of Hearts by DL Snow – Once a princess, now an assassin. How’s that for a happily ever after? Heartbroken and in disguise, Zaina must kill an innocent king if she hopes to save the man she loves. 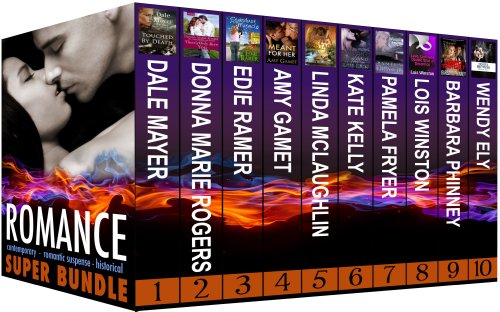 Ten full-length romance novels by ten of your favorite authors for one low price!

Touched by Death – Dale Mayer
Death had touched anthropologist Jade Hansen in Haiti once before, costing her an unborn child and perhaps her very sanity. A year later, determined to face her own issues, she returns to recover the bodies of an American family from a mass grave-only to find the grave holds more than expected-and Jade finds herself confronting death and terror once again. And the man who unexpectedly awakens her heart is right in the middle of it all.

There’s Only Been You – Donna Marie Rogers
Two weeks after Mike Andrews disappeared from her life, Sara Jamison discovered she was an unwed pregnant teenager. With the love and support of her annoyingly alpha-male family, she’s made a good life for herself and her young son. Sure, she works too hard and her social life is nonexistent, but for the most part, she’s content-until the day Mike walks into her bakery and back into her life.

Stardust Miracle – Edie Ramer
Becky Diedrich is the cheesemaker’s daughter, the minister’s wife, the good sister. What she’s not is her own woman, what she can’t be is a mother. And then she catches her husband with another woman, and she moves in with her sister, and she starts to see sparkles. And this is just the beginning…

Meant for Her – Amy Gamet
A fiery homicide leaves Navy investigator Hank Jared with just two clues: an encrypted message and a name, Julie X. Trueblood. Shadows surround Julie, and Hank finds the perfect place to hide her, right by his side at his sister’s wedding. Now he just needs to remember their relationship is all an act.

Rogue’s Hostage – Linda McLaughlin
Mara Dupre is taken captive by a French and Indian War party that attacked her cabin and killed her husband. She longs for her freedom, but her captor has other ideas. Lt. Jacques Corbeau’s desire for his hostage threatens what little honor he has left. Will Mara find her way home, or realize she is already there?

Sleight of Hand – Kate Kelly
Suspected of stealing half a million dollars of original paintings, Chance Spencer can’t afford to have the FBI delve into his covert past. When one agent tries to put him behind bars, Chance coerces the real thief’s daughter into helping him flush her wily father out of hiding. But his plan quickly deteriorates when the stakes for his freedom soar. How can he ruthlessly use the woman with whom he’s falling in love?

August Unknown – Pamela Fryer
She doesn’t know what happened the night of the storm, why she was walking along the highway without ID, or why she has a fading tan line on her wedding ring finger, but a dark and terrifying presence haunts the edge of her memory. Before she can start a new life with the wonderful man who came to her rescue, she must remember what in her past might take her away from him.

Love, Lies and a Double Shot of Deception – Lois Winston
Life has delivered one sucker punch after another to Emma Wadsworth. The poor little rich girl is the ultimate poster child for “Money Can’t Buy Happiness”-even if she’s no longer a child. So when Philadelphia’s most beloved citizen becomes the city’s most notorious criminal, she needs to do a lot more than clear her name if she wants to save her budding romance with the billionaire hunk someone is willing to kill for.

Hard Target – Barbara Phinney
Sgt. Dawna Atkinson has worked hard for her embassy posting, even while taking the blame for a shared indiscretion with her instructor, Tay Hastings. But when her embassy is bombed and Tay arrives to assist, she is forced to trust Tay or risk the lives of everyone around them.

Jesse’s Brother – Wendy Ely
One woman, two men: a single summer to choose between them. Sacrificing a summer to fix her relationship with her mother and find out what’s troubling her father isn’t so bad…right? Wrong. First comes Noah. Then comes Jesse. Will Samantha be able to choose between the men before their secret crushes her? 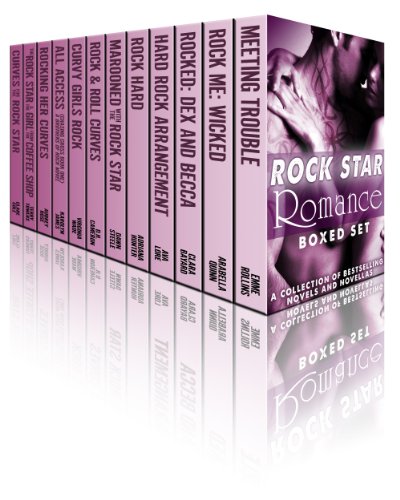 From sinfully hot guitarists to wildly aggressive, dominant heavy-metal rockers, these are the bad boys of the music industry. This special collection brings you 12 of the hottest rockstar romance stories ever told from many of your favorite authors – all for just $0.99 for a very limited time! (Regular price $9.99)

Now get a DOZEN novels and novellas all featuring deliciously naughty rock stars by the hottest New York Times, USA Today, Amazon and Barnes & Noble bestselling authors in the rock & roll romance genre all together in one amazing boxed set.

So bring your lighter and get ready to toss your panties on stage!

Warning: This special offer is available for a limited time only!

MEETING TROUBLE by Emme Rollins (Note: This was originally published as “Happy Accident.”)
ROCK ME: WICKED by Arabella Quinn
ROCKED: DEX & BECCA by Clara Bayard
HARD ROCK ARRANGEMENT (THE LONELY KINGS, #1) by Ava Lore
ROCKING HER CURVES by Aubrey Rose
ROCK & ROLL CURVES by D. H. Cameron
MAROONED WITH THE ROCK STAR by Dawn Steele
ALL ACCESS (CHASING CROSS BOOK ONE – A BROTHERS OF ROCK NOVEL) by Karolyn James
NEW SENSATION & RUN TO YOU – CURVES FOR THE ROCK STAR 1&2 by Clare Cole
THE ROCK STAR AND THE GIRL FROM THE COFFEE SHOP by Terry Towers
CURVY GIRLS ROCK by Virginia Wade
ROCK HARD by Adriana Hunter

This TWELVE book collection of rock stars and the women who can’t resist them features stories from best-selling authors including USA Today & New York Times best-sellers. This is a deal you can’t pass up! 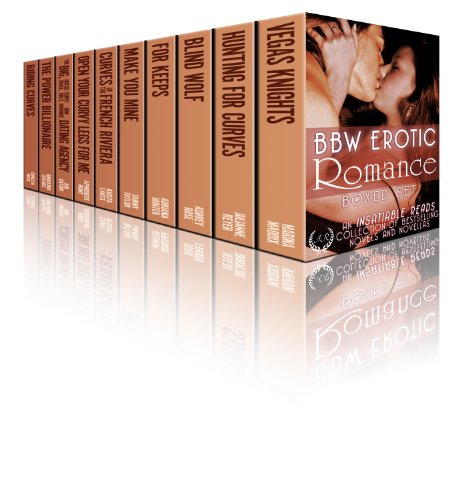 A Top 10 seller in the Amazon store, 99 cents for only a few days longer!

Dangerous curves ahead! This collection of ten scorching hot romances featuring plus-size heroines and the powerful alpha males who crave their lush, curvy bodies is guaranteed to spark a fire deep inside, whether you’re looking for a rags-to-riches fairytale, a rough and wild love affair, or a sweet and sexy friends-to-lovers romance. Pamper your inner big girl with this boxed set and feel the heat!

VEGAS KNIGHTS by Marina Maddix, author of the bestselling Laid Bear: Curvy artist Kelly finds herself on the ride of her life to Las Vegas with a real-life ‘Knight on shining armor’, but is their love strong enough to survive beyond the dazzling lights of Sin City?

BLIND WOLF by Aubrey Rose: A blind werewolf leading a pack of stragglers finally finds his one true mate — then realizes she’s human…

FOR KEEPS by Adriana Hunter, Amazon and B&N Top 100 Bestselling author: Curvy single Valerie Gordon finds herself reluctantly accepting a job transfer where she comes face-to-face with billionaire bad boy Tyler Princeton, son of the senior partner. Tyler isn’t used to being turned down and when he sets his sights on Valerie there is little that he won’t do to get her into his arms, and into his bed…

MAKE YOU MINE by Tawny Taylor, USA Today Bestselling Author in addition to B&N and Amazon Top 100 Bestselling author: To keep her job, Daryl Laroche must find the perfect new client for her employer–a prestigious matchmaking company–and the sexy, rich and enigmatic Tevin Page fits the bill. But before he signs the contract, he issues one deliciously tempting demand…

CURVES OF THE FRENCH RIVIERA by Krista Lakes, author of the bestselling romance “Saltwater Kisses”: Megan can’t believe her luck when a billionaire playboy courts her and makes her a part of his life on the south coast of France, despite her flaws.

THE POWER BILLIONAIRE by Angelina Spears: Plus-size secretary Merrin Rexford is seduced by a powerful billionaire who harbors dark secrets, but dangerous Special Agent Evartt makes her world – and desires – spin out of control! Who will she choose?

RIDING CURVES by Christa Wick, bestselling author of PET. Stuck on the back of Aiden Perry’s motorcycle, engine thrumming between her legs while she is pressed against his big, hard body, Cecelia Harper is about to have her secret crush exposed.

Don’t forget to check out the other Insatiable Reads boxed sets, links in the review section [on this set's Amazon product page]!