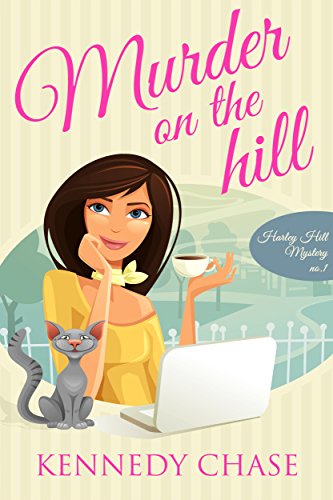 Look out London, there’s a new investigator in town! Harley Hill is a twenty-five year old woman in need of a new identity. Until now she’s been know as many things: Baker, Crazy Cat Lady, Thief, Bandit, The girl dressed like a ninja…

When she’s offered an investigative position at the Silvers Finders Agency, she decides it’s time to go straight. Her first case is to discover why a mysterious object was left behind at a jewelry store break-in. But when it turns into a murder case, Harley will need all her skills to find the killer and uncover the secret of the artifact.

With the help of her new friends, an inquisitive cat, and two sexy men, Harley faces a race against the clock to catch the murderer. If she fails, it won’t just be the job she loses—but her life.

“Set in London’s Notting Hill, the Harley Hill Mysteries are a blend of romantic mystery and suspense that promises a fast-paced, entertaining read.”

5-star Amazon reviews
“Love this book! I couldn’t stop reading!”
“Engaging, well-written…”
“Really fun mystery with a funny heroine who reminds me a little of Stephanie Plum…”
About the author

Kennedy Chase was born in New York in 1969 but moved to London when she was a teenager. She now lives in Notting Hill with her grey cat, Monty, and half a dozen Corgis and Pugs. (3 of each).

Kennedy is a writer of women sleuth mystery novels. She loves to bake in her spare time, and specialises in chocolate cake. On the weekends, Kennedy likes to retreat to the country for long walks with her dogs, all the while dreaming up new plots for her characters.