BB10: all the reaction in the latest tech. magazine for iPad 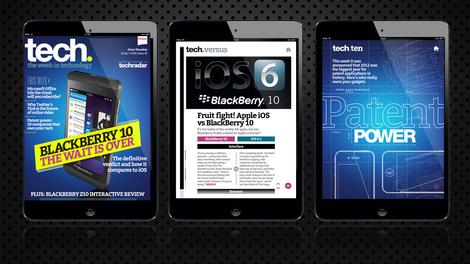 This week's issue of tech. magazine has landed on the digital door-step of Apple Newsstand and is packed with everything you need to know about BlackBerry 10.

The reaction around the web with regards to BB10 has been vast and varied, so it's good then that tech. manages to cut through the noise to offer a considered approach to what many is calling the last roll of the dice for the artist formally known as RIM.

In the issue there's an interactive review of the BlackBerry Z10, BB10 is pitted against iOS 6 and moving away from phones there's an in-depth feature on those who hold the patent power to your shiny gadgets. And don't forget the cover, which manages to show off the history of RIM in just 15 seconds.

Good but not good enough

Speaking about the latest issue, Marc Chacksfield, editor of tech. said: "The BlackBerry press conference was big and brash but underneath the hyperbole was a company struggling to show its worth in an industry overrun by Android and iOS devices. While BB10 is a decent upgrade for BlackBerry, as our feature in the tech. shows, the reaction to the phone was very much 'good but not good enough'."

Now on to its 10th issue, tech. magazine is available every Thursday for your iPad, offering bespoke content from the makers of TechRadar. Grab the latest issue of tech. from iTunes now. And don't forget that you can still get five issues free when you sign up for a subscription.