Benchmarks For The Samsung GT-P3200 Tablet Surface, Brings Us One Step Closer To Possibly Seeing The Galaxy Tab 3 In All Its Glory 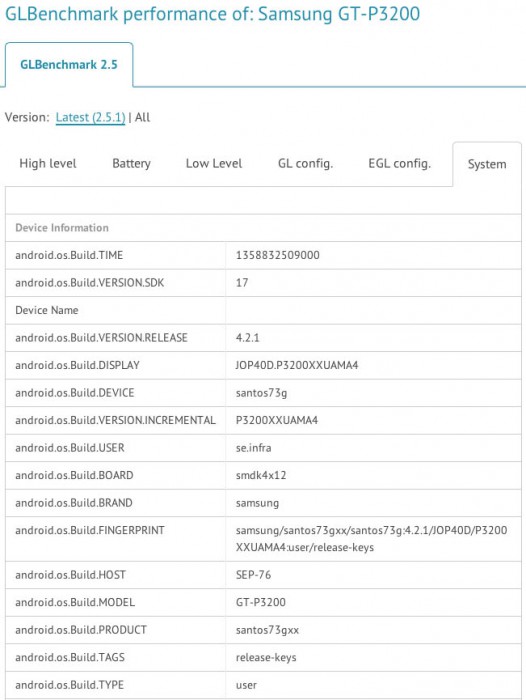 It certainly appears that Sammy is pulling no stops when it comes the developing some sweet tablets for 2013. We are already aware of the Galaxy Note 8.0 that’s on the way, but a leaked GLBenchmark has recently surfaced indicating yet another beast is currently in the works. If you recall, we recently told you about Sammy’s plans on bringing some new additions to the Galaxy Tab family— and we now have a nifty little benchmark which helps to prove what we’d heard before. According to the screenshot you see above, the device is currently codenamed “Santos” and has a model number of GT-P3200. In addition, the device features the latest build of Jelly Bean (Android 4.2.1), has a 1,200 x 800 resolution and has a peak frequency of something around 1.5GHz.

Additional details are scarce for now, but it’s probably a safe bet to assume that we’re getting our first glimpse of what could possibly be the Galaxy Tab 3 tablet. But then again— it could be something else entirely different. Nevertheless, we’ll be keeping our eyes and ears open of this mysterious little toy that Sammy has in development.