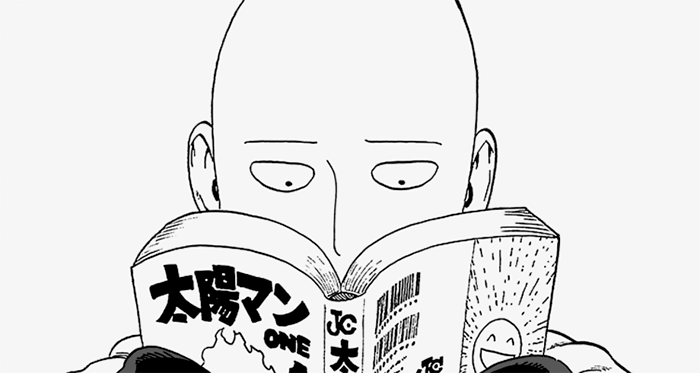 Japan has contributed a lot to the world. From top-of-the-line devices, high-quality appliances and innovative cameras to breakthrough vehicles and motorcycles – the Land of the Rising Sun has become the home to some of the best tech makers including Sony, Panasonic, Canon, and Yamaha.

Aside from solidly-built tech products, Japan is also known for introducing Anime and Manga across the globe. It’s not just for children, either!

Many people continue to watch anime and read manga into adulthood. 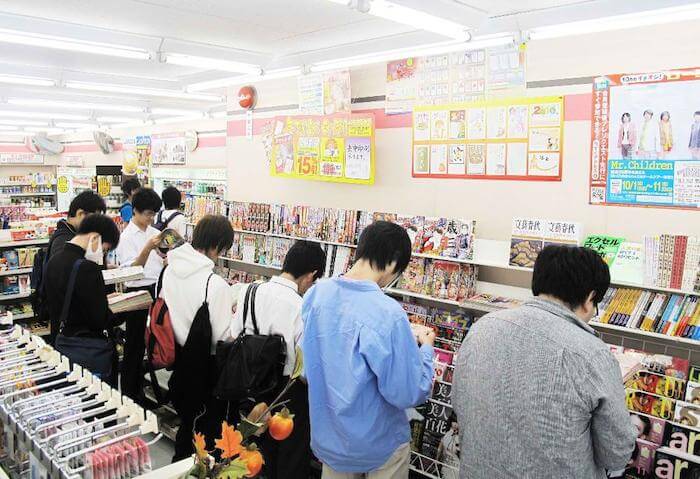 Manga are comics created in Japan and initially written in the Japanese language. However, with the arrival of manga in the global space, it is being translated in different languages, including English, so non-Japanese readers can also join in the fun.

In this technological era, you don’t need to bring a physical manga book with you – you can now read straight from your smartphone, anytime and anywhere!

No longer do you have to head to the nearest bookstore to buy the latest issue. With just a few clicks, you can read practically any manga, anywhere! 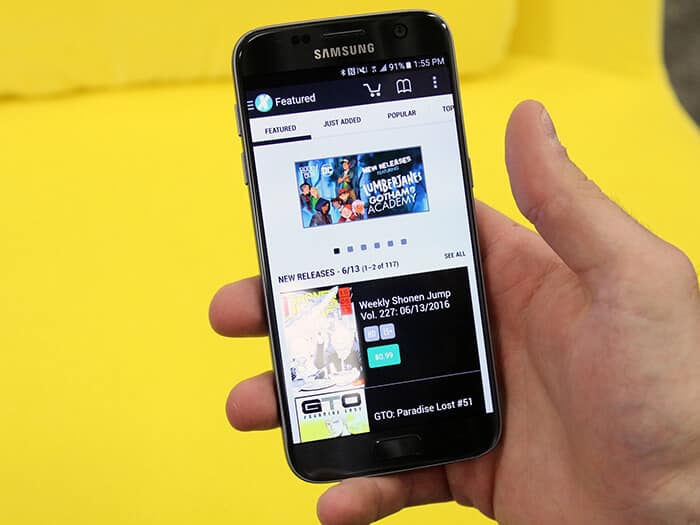 If you’re new to manga, you should remember that the comics are read backward from left to right, just as Japanese characters are originally written.

Because of that, I advise using a dedicated manga app instead of a more generalized book reader.

We’ve rounded up the 10 best free Android apps for reading manga. Let’s get into it!

This Android app is considered one of the best manga readers available in 2018. It has a lot to offer, with content from over 125 publishers and thousands of independent creators sourced from various parts of the world.

While it was originally made for Marvel and DC comics fans, comiXology provides an unrivaled library of comic books, graphic novels, and of course, manga.

In fact, it has more than 100,000 stories to choose from, which we believe you can’t finish in a lifetime.

ComiXology is specifically built for comic reading and boasts a Guided View technology which delivers an immersive and cinematic experience.

The selection is purely digital and may not suit those who are building physical collections.

The manga app itself is downloadable for free but you have to pay for the individual comics. If you are a full-fledged manga addict, you can also opt to subscribe and pay a couple of bucks monthly to read unlimited manga.

You can download the comiXology app on Google Play Store: 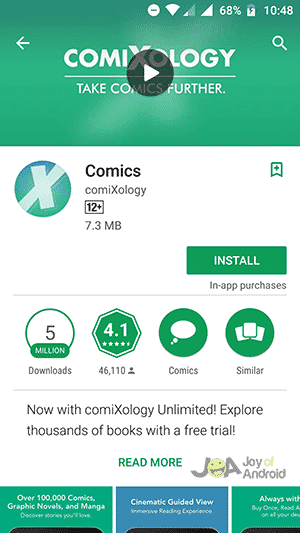 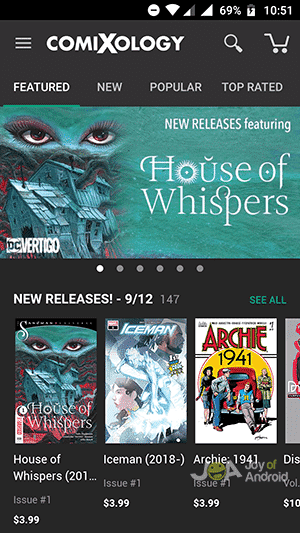 Crunchyroll is also a great manga reader for Android, as it is the most updated app of all. As soon as the latest issue of manga arrives in Japanese bookstores, you can immediately access it on the Crunchyroll app.

The app is free to download with an option to apply for its monthly subscription service. If you choose to subscribe, the manga floodgates will open for you and you can read your favorite manga without those annoying ads.

On the other hand, if you prefer to stay on the free side, you can still read several free manga and anime comic books. You can also put them on the favorites tabs or bookmark them.

Here’s the link to the manga reader on Google Play Store: 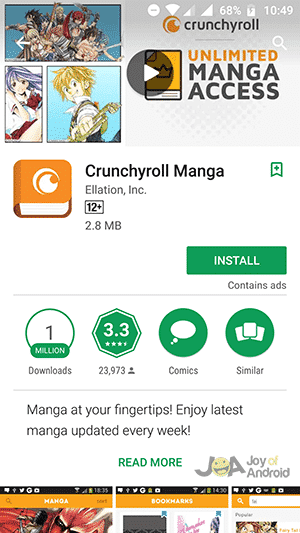 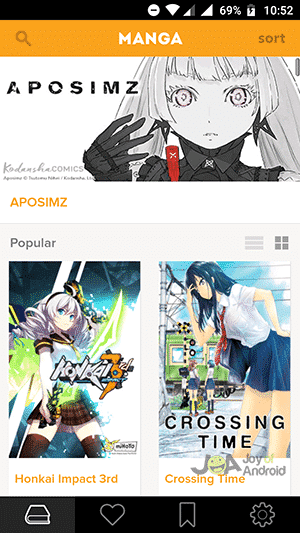 The Manga Box offers a wonderful reading experience for smartphone and tablet users alike. The application perfectly adjusts the document image to the screen so you can see and read all the elements of the manga.

What’s interesting about Manga Box is you won’t have to shell out any money. You can read all of the manga for free! Don’t worry, it also includes popular manga in addition to ordinary, lesser-known issues.

Manga Box promises that you won’t have an idle time because new content will be uploaded every day. That said, you’ll have a new manga to read daily!

If this Android app has caught your interest, you are free to download it from Google Play Store. 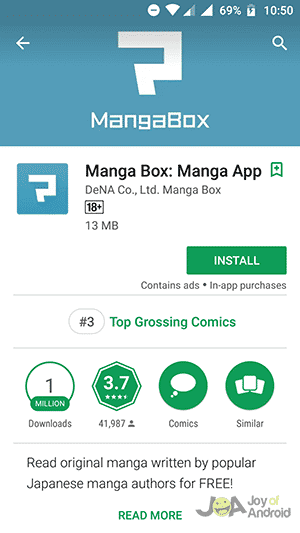 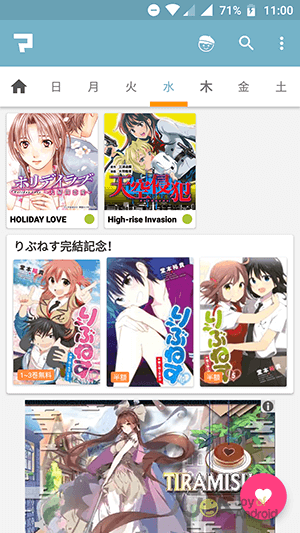 Manga Master allows you to download and read manga series. You can pick from thousands of options, all of which can be translated into 10 different languages, including English of course.

You have two options when reading manga on the app: You can directly read the comics while connected to the internet or download the chapters and read them later while offline.

If you plan to construct a virtual manga library, Manga Master is a good choice for you. It allows you to store a collection of your favorite manga so that you can easily re-read them whenever you want.

You can also leave a comment about a manga you have read.

The Manga Master is downloadable for free and offers a very wide selection of free manga series. For premium titles, you’ll have to pay a few extra bucks.

Here’s the link to Manga Master on Google Play Store: 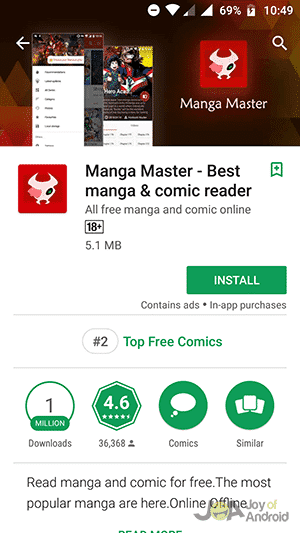 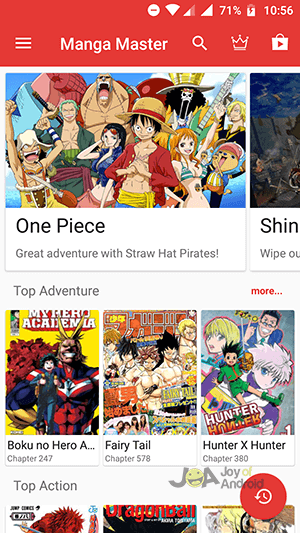 The Manga Rock is one of the most popular manga readers for Android. It has over 1 million downloads and offers more than 100,000 manga series. With the app, you can read manga from over 20 sources and in several languages.

It flaunts a customizable interface and provides a seamless reading experience. You can opt to change the display orientation from horizontal to vertical, reduce or enlarge the image, and adjust the brightness level.

The manga reader supports high-speed content downloads. The downloaded file will then be saved on your microSD card. You can also place a manga title on the Favorites tab or have it bookmarked for easy access.

You can download it for free on the Google Play Store. If you want those annoying ads gone, you might want to subscribe and pay $3.99 monthly. 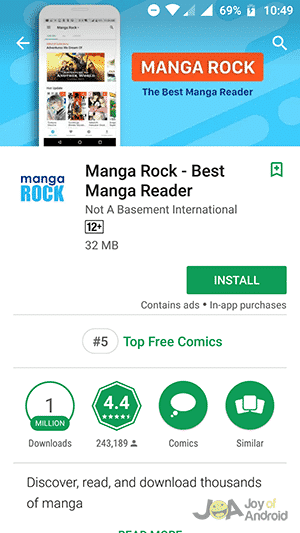 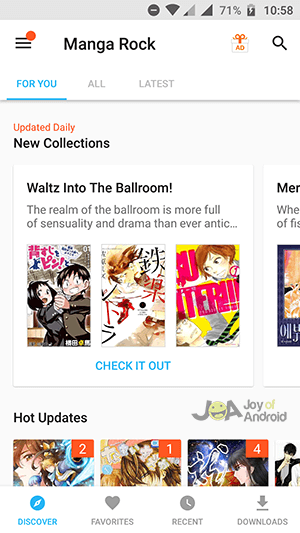 MangaZone is another free Android app for manga lovers. It has a clean and simple interface, which makes it easy for anyone to browse through it. Searching new manga series is also simple and doesn’t require a lot of work.

It features more than 15000 manga titles that are already translated to English. Just like the other manga readers, the MangaZone also comes with reading customization options. You can also acquire information regarding the author and the original title.

There’s a section to talk about the manga series with other fans. You can leave comments and share your thoughts with them as well as recommend the manga comics you have already read.

The MangaZone app is free to download on Google Play Store and offers a slew of free manga titles you can read. 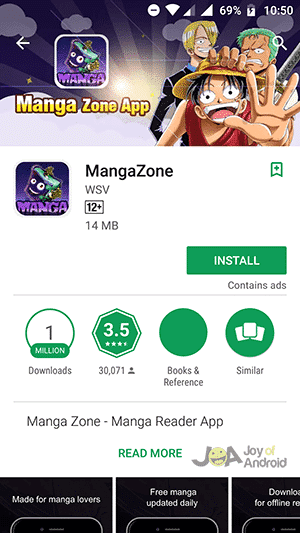 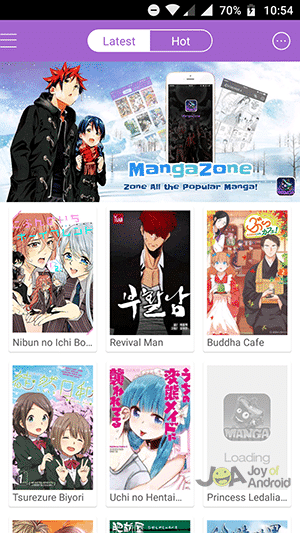 One of the best Android app to read free manga series, the VIZ Manga promises new content to download every day. It is known for having manga comics readily translated to English.

To make reading easier, the VIZ Manga has a Bookmark Mode and you can choose from single or double-entry landscape reading. Customization settings such as zoom preferences, right or left reading preference, and brightness settings are also included in the app.

VIZ Manga can be downloaded for free on the Google Play Store. 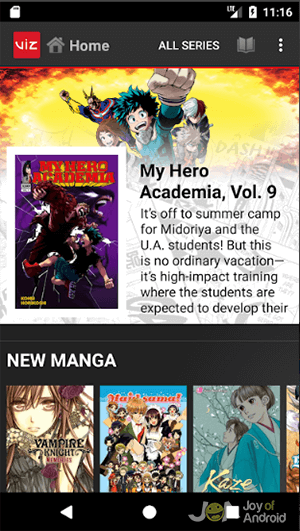 Reading Japanese comics or manga has been a fun pastime for many people from all over the world. I don’t blame them – manga series are really interesting and thrilling to read!

With all the great Android apps I recommended above, you are sure to have a ton of manga reading time in your near future.

Are you a manga addict? Which one is the best manga reader for you? Share your positive experiences with us. Your reviews will help other readers who want to give mangas a try.