The Bezel-Less BLUBOO S1 Compared To The Samsung Galaxy S8

The BLUBOO S1 is the latest smartphone to emerge from the house of BLUBOO and is expected to become available this month, June 2017. While the smartphone comes with a number of points worth noting, the overriding selling point is that it does come equipped with a bezel-less display. Following on from a number of other high profile smartphones adopting the same display design and selling point. In fact, to highlight the value on offer with the BLUBOO S1, BLUBOO has been comparing this device against those other commonly-encountered bezel-less phones. The last comparison focused on how the BLUBOO S1 held its own against the Xiaomi Mi MIX and now the BLUBOO S1 has set its sights on the Samsung Galaxy S8.

In terms of the straight numbers, the Samsung Galaxy S8 comes equipped with a 5.8-inch Super AMOLED display along with a 2960 x 1440 resolution. Compared to the BLUBOO S1’s 5.5-inch SHARP display with a 1920 x 1080 resolution. Inside, the Galaxy S8 comes loaded with 4GB RAM, 64GB internal storage, and is powered by an Exynos 8895 octa-core SoC (clocking at 2.3 GHz) in international markets, compared to the BLUBOO S1 which comes powered by a MediaTek Helio P25 octa-core SoC (clocking at 2.5 GHz). On the camera side of things, the Galaxy S8 includes a 12-megapixel rear camera, along with an 8-megapixel front-facing camera. While the BLUBOO S1 also comes loaded with an 8-megapixel front-facing camera, this is in addition to a dual rear camera setup – spearheaded by a 16-megapixel camera, backed up by a 3-megapixel secondary camera. As for the batteries, while the Galaxy S8 comes packed with a 3,000 mAh battery, the BLUBOO S1 comes loaded with a 3,500 mAh battery. Both units come packed with a fingerprint sensor (although they are positioned on different sides of the device) and both obviously make use of a display-first front panel. With the difference being that Samsung’s Infinity Display makes use of an 83.6-percent screen-to-body ratio, while the BLUBOO S1 includes a 90-percent screen-to-body ratio. One more notable difference is the price, with the Galaxy S8 coming in at over $700 and the Bluboo S1 coming in at $150. 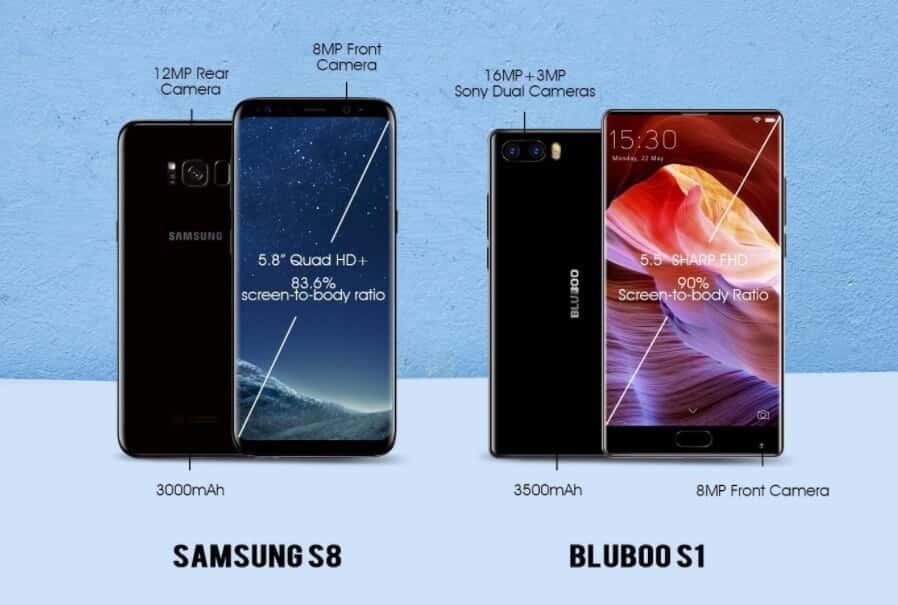 Based on those numbers alone, it is clear that the Samsung Galaxy S8 is the more powerful smartphone and in a number of areas. Although, it is also significantly more expensive, which is the point BLUBOO is looking to make here. While also highlighting that in spite of that price gulf between the two, the BLUBOO S1 also does offer some features that you won’t find on the Galaxy S8. With the inclusion of a dual rear camera setup being a prime example, in addition to a higher screen-to-body ratio, and a greater capacity battery.

The post The Bezel-Less BLUBOO S1 Compared To The Samsung Galaxy S8 appeared first on AndroidHeadlines.com |.