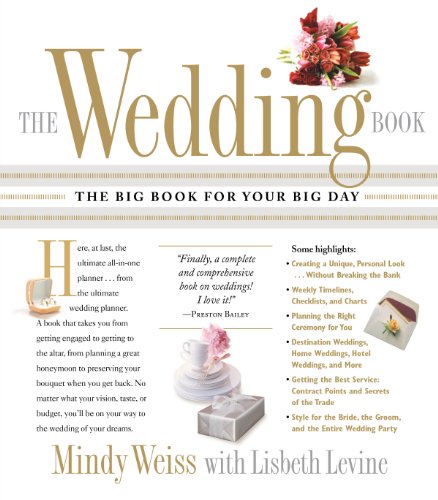 Amazon’s offering another of its Kindle Big Deals right now, with deeply discounted Kindle books available through 5/11/14. The current Big Deal sale includes such titles as:

Announcing the wedding bible: the most complete, lively, handholding, step-by-step guide to help every couple have a perfect wedding—no matter their budget, taste, or personalities. More than 2.2 million North American couples tie the knot each year; until now, only a mere fraction could work with celebrity wedding planner Mindy Weiss. But the significant fact is not Ms. Weiss’s clientele, but the reason for it: She’s so very good at what she does. And now she shares all of her hard-won experience, wisdom, inspiration, and style tips.

The Wedding Book covers everything, in a voice filled with understanding: announcing the engagement, and what to do when someone isn’t happy about the news; creating a budget; the pros and cons of destination weddings. Drawing up the guest list; planning the ceremony (and how to personalize your vows); menus to inspire; contracts and wedding insurance. Shopping for the dress, six great hairstyles, tuxedo vs. dinner jacket, the etiquette of invitations. Style tips for flowers, the tabletop, linens; a cake that says “you”; the crucial “Sixty Days Until I Do”; rehearsal dinner strategies; plus freezing the cake and preserving the bouquet.

Today the average cost of a wedding is $25,000—at $19.95, The Wedding Book is the smartest investment a bride-to-be could make. 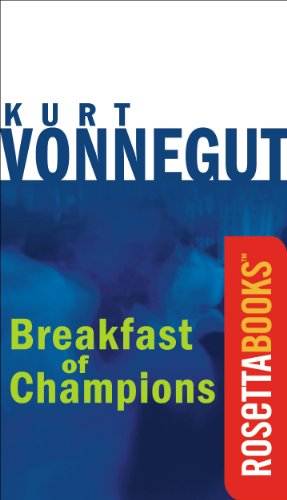 Breakfast of Champions (1973) provides frantic, scattershot satire and a collage of Vonnegut’s obsessions. His recurring cast of characters and American landscape was perhaps the most controversial of his canon; it was felt by many at the time to be a disappointing successor to Slaughterhouse-Five, which had made Vonnegut’s literary reputation.

The core of the novel is Kilgore Trout, a familiar character very deliberately modeled on the science fiction writer Theodore Sturgeon (1918-1985), a fact which Vonnegut conceded frequently in interviews and which was based upon his own occasional relationship with Sturgeon. Here Kilgore Trout is an itinerant wandering from one science fiction convention to another; he intersects with the protagonist, Dwayne Hoover (one of Vonnegut’s typically boosterish, lost and stupid mid-American characters) and their intersection is the excuse for the evocation of many others, familiar and unfamiliar, dredged from Vonnegut’s gallery.

The central issue is concerned with intersecting and apposite views of reality, and much of the narrative is filtered through Trout who is neither certifiably insane nor a visionary writer but can pass for either depending upon Dwayne Hoover’s (and Vonnegut’s) view of the situation. America, when this novel was published, was in the throes of Nixon, Watergate and the unraveling of our intervention in Vietnam; the nation was beginning to fragment ideologically and geographically, and Vonnegut sought to cram all of this dysfunction (and a goofy, desperate kind of hope, the irrational comfort given through the genre of science fiction) into a sprawling narrative whose sense, if any, is situational, not conceptual.

Reviews were polarized; the novel was celebrated for its bizarre aspects, became the basis of a Bruce Willis movie adaptation whose reviews were not nearly so polarized. (Most critics hated it.) This novel in its freewheeling and deliberately fragmented sequentiality may be the quintessential Vonnegut novel, not necessarily his best, but the work which most truly embodies the range of his talent, cartooned alienation and despair. 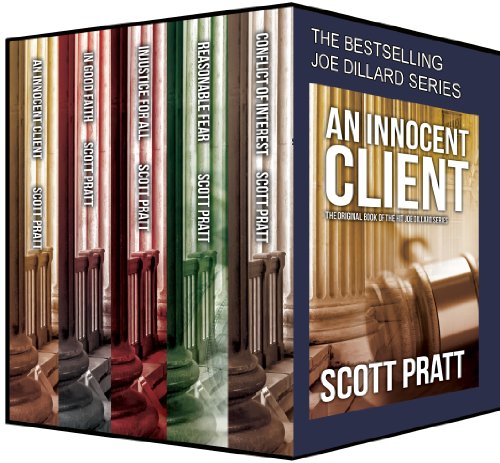 Books one through five of the bestselling Joe Dillard series by Scott Pratt are offered in a box set at a discounted price. “An Innocent Client,” “In Good Faith,” “Injustice for All,” “Reasonable Fear” and “Conflict of Interest” have received a combined 1,800 FIVE-STAR reviews from readers. All five of the novels are consistently rated among the top-25 bestselling legal thrillers, and all five are among the most highly-rated novels on Amazon. Enjoy a quality set that will offer you more than forty hours of pleasure and entertainment — nearly 2,000 pages 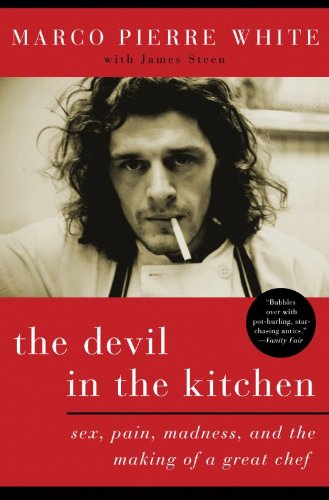 Without question, the original rock-star chef is Marco Pierre White. Anyone with even a passing interest in the food world knows White is a legend. The first British chef (and the youngest chef anywhere) to win three Michelin stars – and also the only chef ever to give them all back – is a chain-smoking, pot-throwing multiply- married culinary genius whose fierce devotion to food and restaurants has been the only constant in a life of tabloid-ready turmoil.

In The Devil in the Kitchen White tells the story behind his ascent from working-class roots to culinary greatness, leaving no dish unserved as he relays raucus and revealing tales featuring some of the biggest names in the food world and beyond, including: Mario Batali, Gordon Ramsay, Albert Roux, Raymond Blanc, Michael Caine, Damien Hirst, and even Prince Charles. With candid honesty and wicked humor, he gives us insight into what it takes to become a great chef, what it’s like to run a 3-star kitchen, and why sometimes you really do need to throw a cheese plate at the wall.