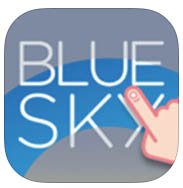 Blue Sky is a free iOS app coming out of China, where skies are often gray and air pollution is often out of control. Of course, China isn't alone with that problem. Blue Sky is sponsored by the World Wildlife Federation and an advertising agency, Ogilvy and Mather, based in New York and Shanghai.

Since it's Earth Day, I thought it might be appropriate to point out this little app. It's simple in concept and execution -- you take a photo or select one from your camera roll. With your finger, paint in a bluer sky on the photo you've loaded. It's easier if you have a pretty flat horizon. The app doesn't let you magnify your photo to work in tight places, and there is one and only one brush size.

The app simply serves as an environmental reminder to let you visualize cleaner and clearer skies. The app also lets you add your signature to a petition to state your preference about 'bringing back the blue'. Although the app was designed for a Chinese audience, it works just fine everywhere else. Doug Schiff, Executive Creative Director of OgilvyOne China, said, "Many in China feel only the government can improve the worsening air conditions, but WWF wanted to encourage individuals to think up and support individual initiatives, and this app is a step in that direction."

Blue Sky isn't a sophisticated photo editor by any means. But it packs a little message, and you can certainly do some simple editing to improve your images of cloudy or polluted skies.

The app is not universal, and requires iOS 6.1 or later. It is optimized for the iPhone 5.

Blue Sky for iOS lets you visualize clearer air originally appeared on Breaking Apple News, Tips and Reviews from The Unofficial Apple Weblog on Tue, 22 Apr 2014 17:00:00 EST. Please see our terms for use of feeds.