Books For The Armchair Scientist 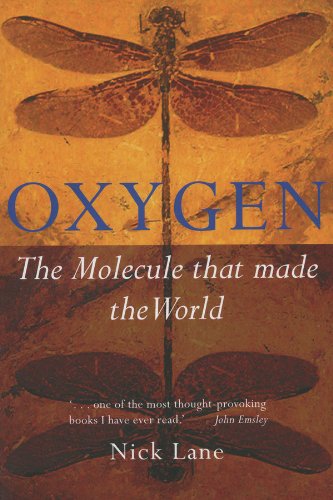 Here are some popular, highly-rated, fascinating and educational books intended for the armchair scientist: someone with a lot of interest, but not necessarily any formal education, in advanced science topics.

Three hundred million years ago, in Carboniferous times, dragonflies grew as big as seagulls, with wingspans of nearly a metre. Researchers claim they could have flown only if the air had contained more oxygen than today – probably as much as 35 per cent. Giant spiders, tree-ferns, marine rock formations and fossil charcoals all tell the same story. High oxygen levels may also explain the global firestorm that contributed to the demise of the dinosaurs after the asteroid impact.

The strange and profound effects that oxygen has had on the evolution of life pose a riddle, which this book sets out to answer. Oxygen is a toxic gas. Divers breathing pure oxygen at depth suffer from convulsions and lung injury. Fruit flies raised at twice normal atmospheric levels of oxygen live half as long as their siblings. Reactive forms of oxygen, known as free radicals, are thought to cause ageing in people. Yet if atmospheric oxygen reached 35 per cent in the Carboniferous, why did it promote exuberant growth, instead of rapid aging and death?

Oxygen takes the reader on an enthralling journey, as gripping as a thriller, as it unravels the unexpected ways in which oxygen spurred the evolution of life and death. The book explains far more than the size of ancient insects: it shows how oxygen underpins the origin of biological complexity, the birth of photosynthesis, the sudden evolution of animals, the need for two sexes, the accelerated aging of cloned animals like Dolly the sheep, and the surprisingly long lives of bats and birds.

Drawing on this grand evolutionary canvas, Oxygen offers fresh perspectives on our own lives and deaths, explaining modern killer diseases, why we age, and what we can do about it. Advancing revelatory new ideas, following chains of evidence, the book ranges through many disciplines, from environmental sciences to
molecular medicine. The result is a captivating vision of contemporary science and a humane synthesis of our place in nature. This remarkable book will redefine the way we think about the world. 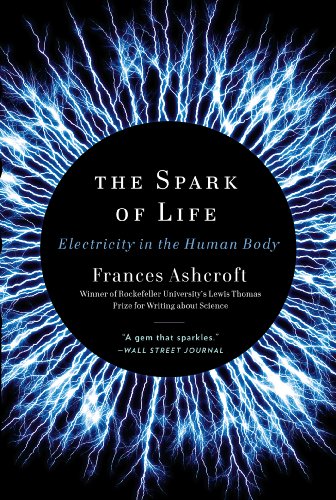 What happens during a heart attack? Can someone really die of fright? What is death, anyway? How does electroshock treatment affect the brain? What is consciousness? The answers to these questions lie in the electrical signals constantly traveling through our bodies, driving our thoughts, our movements, and even the beating of our hearts.

The history of how scientists discovered the role of electricity in the human body is a colorful one, filled with extraordinary personalities, fierce debates, and brilliant experiments. Moreover, present-day research on electricity and ion channels has created one of the most exciting fields in science, shedding light on conditions ranging from diabetes and allergies to cystic fibrosis, migraines, and male infertility.

With inimitable wit and a clear, fresh voice, award-winning researcher Frances Ashcroft weaves together compelling real-life stories with the latest scientific findings, giving us a spectacular account of the body electric. 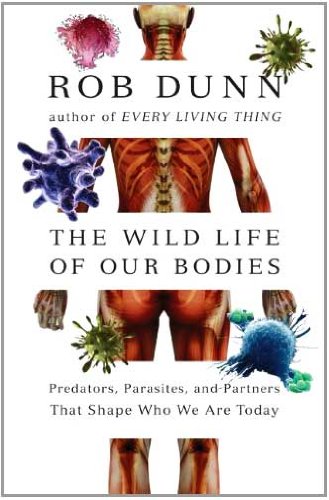 The Wild Life of Our Bodies: Predators, Parasites, and Partners That Shape Who We Are Today (4.5/5 stars, currently priced at $9.99)

Biologist Rob Dunn reveals the crucial influence that other species have upon our health, our well-being, and our world in The Wild Life of Our Bodies—a fascinating tour through the hidden truths of nature and codependence.

Dunn illuminates the nuanced, often imperceptible relationships that exist between homo sapiens and other species, relationships that underpin humanity’s ability to thrive and prosper in every circumstance. Readers of Michael Pollan’s The Omnivore’s Dilemma will be enthralled by Dunn’s powerful, lucid exploration of the role that humankind plays within the greater web of life on Earth.

“An extraordinary book…. With clarity and charm [Dunn] takes the reader into the overlap of medicine, ecology, and evolutionary biology to reveal an important domain of the human condition.”
—Edward O. Wilson, author of Anthill and The Future of Life 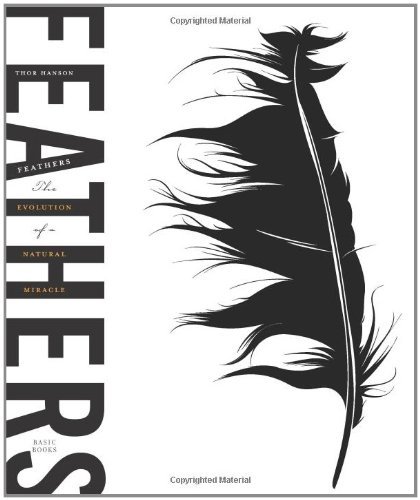 Feathers: The Evolution of a Natural Miracle (5/5 stars, currently priced at $8.79)

Feathers are an evolutionary marvel: aerodynamic, insulating, beguiling. They date back more than 100 million years. Yet their story has never been fully told.
In Feathers, biologist Thor Hanson details a sweeping natural history, as feathers have been used to fly, protect, attract, and adorn through time and place.

Applying the research of paleontologists, ornithologists, biologists, engineers, and even art historians, Hanson asks: What are feathers? How did they evolve? What do they mean to us?

Engineers call feathers the most efficient insulating material ever discovered, and they are at the root of biology’s most enduring debate. They silence the flight of owls and keep penguins dry below the ice. They have decorated queens, jesters, and priests. And they have inked documents from the Constitution to the novels of Jane Austen.

Feathers is a captivating and beautiful exploration of this most enchanting object. 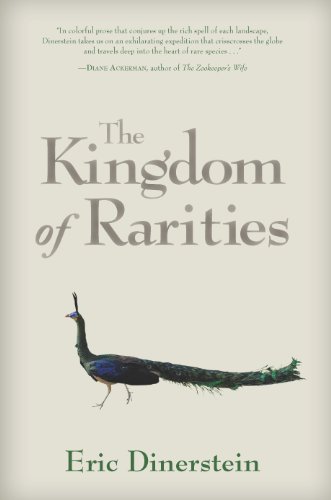 When you look out your window, why are you so much more likely to see a robin or a sparrow than a Kirtland’s warbler or a California condor? Why are some animals naturally rare and others so abundant?

The quest to find and study seldom-seen jaguars and flamboyant Andean cocks-of-the-rock is as alluring to naturalists as it is vitally important to science.

From the Himalayan slopes of Bhutan to the most isolated mountain ranges of New Guinea, The Kingdom of Rarities takes us to some of the least-traveled places on the planet to catch a glimpse of these unique animals and many others.

As he shares stories of these species, Eric Dinerstein gives readers a deep appreciation of their ecological importance and the urgency of protecting all types of life — the uncommon and abundant alike. 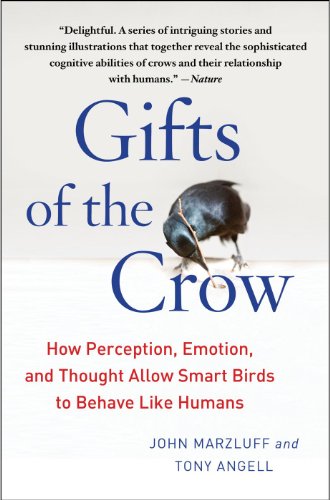 Gifts of the Crow: How Perception, Emotion, and Thought Allow Smart Birds to Behave Like Humans (4.5/5 stars, currently priced at $9.73)

CROWS ARE MISCHIEVOUS, playful, social, and passionate. They have brains that are huge for their body size and exhibit an avian kind of eloquence. They mate for life and associate with relatives and neighbors for years. And because they often live near people—in our gardens, parks, and cities—they are also keenly aware of our peculiarities, staying away from and even scolding anyone who threatens or harms them and quickly learning to recognize and approach those who care for and feed them, even giving them numerous, oddly touching gifts in return.

With his extraordinary research on the intelligence and startling abilities of corvids—crows, ravens, and jays—scientist John Marzluff teams up with artist-naturalist Tony Angell to tell amazing stories of these brilliant birds in Gifts of the Crow. With narrative, diagrams, and gorgeous line drawings, they offer an in-depth look at these complex creatures and our shared behaviors.

The ongoing connection between humans and crows—a cultural coevolution—has shaped both species for millions of years. And the characteristics of crows that allow this symbiotic relationship are language, delinquency, frolic, passion, wrath, risk-taking, and awareness—seven traits that humans find strangely familiar. Crows gather around their dead, warn of impending doom, recognize people, commit murder of other crows, lure fish and birds to their death, swill coffee, drink beer, turn on lights to stay warm, design and use tools, use cars as nutcrackers, windsurf and sled to play, and work in tandem to spray soft cheese out of a can. Their marvelous brains allow them to think, plan, and reconsider their actions.

With its abundance of funny, awe-inspiring, and poignant stories, Gifts of the Crow portrays creatures who are nothing short of amazing. A testament to years of painstaking research and careful observation, this fully illustrated, riveting work is a thrilling look at one of nature’s most wondrous creatures.