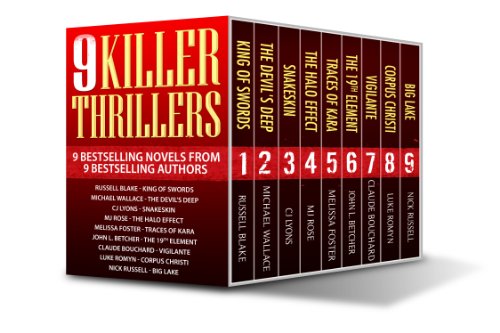 Kindle Price: 99 cents
Text-to-Speech: Enabled
Don’t have a Kindle? Get yours here.
Here’s the set-up:

Facts about the novels:

*    Praise from the likes of Janet Evanovich, Stan Pottinger and Lisa Gardner
*    Thousands of reviews and average ratings of 4.2, 4.3 and 4.4 stars, even one at a whopping 4.7
*    Hundreds of thousands of copies of each already in distribution
*    Bestseller rankings as high as #1
*    Sustained Top 100 author rankings

Vigilante
A vigilante prowls the shadowy streets of Montreal, ridding it of its predators while the harried police race the clock to stop the remorseless killer before he strikes again. But whose justice will ultimately prevail: theirs, or the vigilante’s?

The Devil’s Deep
A heart-pounding thriller that will stay with the reader long after the last page is turned, the Devil’s Deep is a top rated suspense that travels from the hell of a long-term care facility to the rain forest of Costa Rica. And a crime committed under tropical waters, the dive known as El Bajo del Diablo–the Devil’s Deep.

Traces of Kara
TRACES OF KARA is an action packed, pulse pounding psychological thriller/suspense novel that features a determined killer who slowly loses his grip on reality as his carefully detailed plan starts to fall apart and a heroine determined to move forward with her life who now must reconcile everything she believed to be true about her family with the reality of their tragic past.

The 19th Element
Retired military intelligence operative James “Beck” Becker and his American Indian cohort “Bull” confront a homegrown terror cell bent on causing nuclear disaster in America’s Heartland. The threat is real; the hour is coming; and despite Beck’s warning, no one is ready to defend.

Big Lake
When an armored car hijacking leaves two men dead, Arizona Sheriff Jim Weber takes the crime personally, because one of the dead men is his brother-in-law. His hunt for the killers leads him into a world of sordid sex, deceit, and violence, with a suspect list that includes jilted women, a family of anti-government survivalists, and the beautiful wife of the richest man in town.

Snake Skin
A loving mom and wife, dutiful daughter, consummate professional, and kick-ass federal agent, Lucy Guardino is living the perfect life.Until the day she comes up against a predator more vicious and cunning than any she’s ever tackled before, one who forces Lucy to choose between the life of the young victim she is fighting to save and her own daughter’s….and Lucy’s dream life is shattered. A Lucy Guardino FBI Thriller.

Corpus Christi
Jacob Hope unwittingly reveals that the gates of Hell have been unlocked and something long imprisoned has broken loose from its shackles to roam free upon the Earth. It cannot be bargained with, it cannot be defeated, it exists with only desolation in its heart… and it’s coming for him.

King of Swords
A breakneck-paced adrenaline rush that pits the head of the anti-cartel task force against a Mexican super-assassin nicknamed the King of Swords, in a race to stop him from killing the president.