'BravePiglet' Review - A Plumber and a Pig Walk Into a Bar...

You would be forgiven if you mistook BravePiglet, the eponymous star of BravePiglet [$0.99], for a certain mustachioed mascot. BravePiglet's resemblance to Mario and the famous plumber's dastardly doppelganger, Wario, goes beyond the superficial.

The piggy and his multi-stage pigpen look and perform almost exactly like recent 2D Mario platformers. You stomp on enemies to defeat them, punch bricks from underneath to claim coins, and collect hidden objects as you progress through stages painted in vibrant colors. BravePiglet pays further tribute to Mario through tight, responsive controls that ax the plumber's ubiquitous run button. All you need to do is press the arrow buttons to move around and tap the 'A' button to scamper up and about ledges.

At first, I was put off by BravePiglet's shameless copycat formula. The early levels are short and straightforward, enemy placement is uninspired, and the challenge is nonexistent. All that was missing was a fire flower and, of paramount importance, the difficulty of the best entries in Nintendo's flagship 2D platforming series that requires players to execute pixel-perfect maneuvers. Then I pressed forward through the first handful of levels, and the differences between BravePiglet, Mario, and virtually any other 2D platformer became more pronounced. 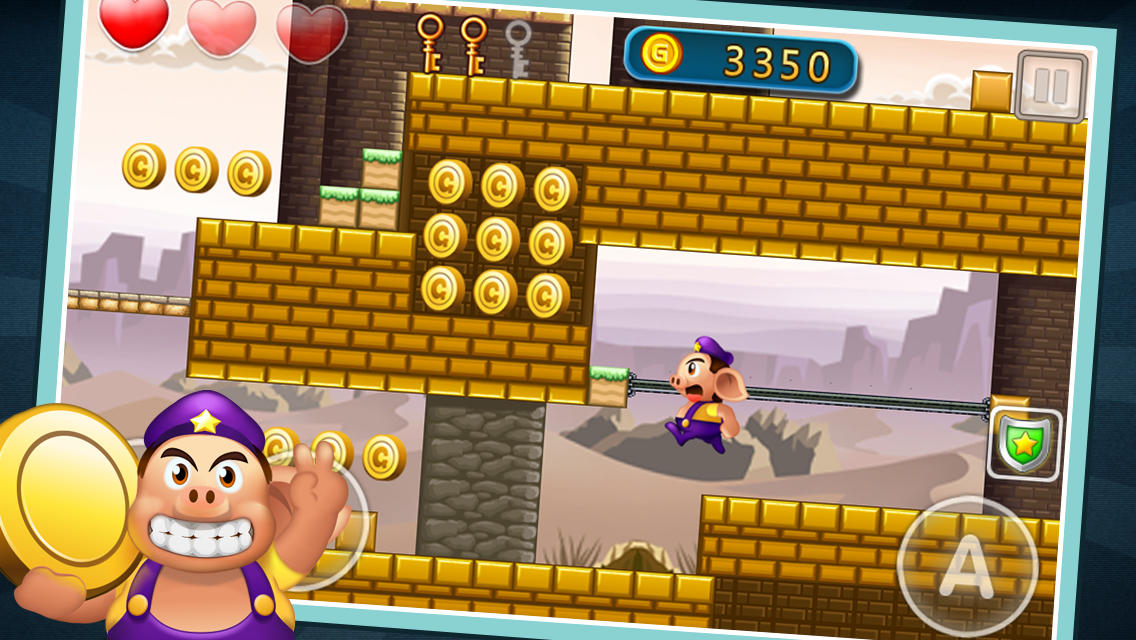 Like the New Super Mario Bros. series, BravePiglet hides three collectible items--keys, in this case--around each level. Rather than ask you to find the keys if you're so inclined, BravePiglet decrees that you find every key to unlock the exit door in each stage. This mechanic both hurts and helps the game. Making hidden items mandatory instead of optional removes any trace of replay value. I play League of Evil [$1.99] games at least twice: once to cross the finish line, and again to round up the collectible briefcases I missed the first time through.

A handful of stages in, however, and I realized tracking down the keys was the real crux of BravePiglet's gameplay. Stages evolve into rambling, labyrinth-like zones littered with nooks and crannies where keys might be hidden, and capably demonstrating that pinnacle of 2D platformer tease: allowing players to catch a glimpse of a key tucked away in one corner of the screen and challenging them to figure out how, exactly, to get there. Enemy types also become more varied and pose a very un-Mario-like threat: there are no healing power-ups in BravePiglet. Three strikes and you're out. You can save up coins to buy protective shields a la bubbles in Sonic the Hedgehog, but they're almost too expensive and fizzle out after a few seconds.

The running-free controls enable you to focus purely on exploring and nabbing keys, but the lack of a run function does result in a slower than fans of the genre might like. Unable to move quicker than a mosey, BravePiglet is devoid of the momentum most platformers ask players to build up to make tough jumps. In-game objects such as lifts move even slower. Miss one and expect to stand around a good five seconds or more until the lift drifts back to your position like a feather sinking through thick summer air.

If you can overlook the plodding pace and the notion that it's yet another shameless Mario clone, BravePiglet presents a fun blend of sprawling levels, just the right amount of challenge to entertain novice and veteran players, and the perfect asking price.