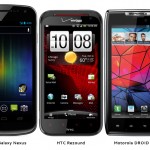 As a long time Android user since the G1 days, I have to say having a choppy browser has been one of the areas that has really irked me about Android devices. Watching all those smug iPhone users with their super fluid browser, scrolling up and down, in and out, I have to admit — I was jealous. Now, with this new generation of dual-core superphones, you would expect all the browsers, across all devices to be nice, smooth and silky, right? Wrong.

If you’re sitting on an upgrade, on the fence about which new device to get, maybe this collection of videos from our very own Android Forums memeber, Medion, will help push you over the edge. Who comes out on top? Who’s cuisine reigns supreme? As a reference, we’re including the iPhone 4S because… c’mon — it’s damn smooth.

After watching these videos, have they possibly changed your mind at all on a future purchase? Granted, there are other factors that influence value like camera and manufacturer UI’s. But when it comes to browsers, I can tell you I’m seeing things in a whole new light. I’m talking to you, Rezound. Get your choppiness together.

Medion also makes a good point on his thread that the performance of these browsers simply has to do largely with software — not hardware. Just look at the differences between the Galaxy Nexus and Rezound who share the same processors and same RAM, yet browser performance is very different.