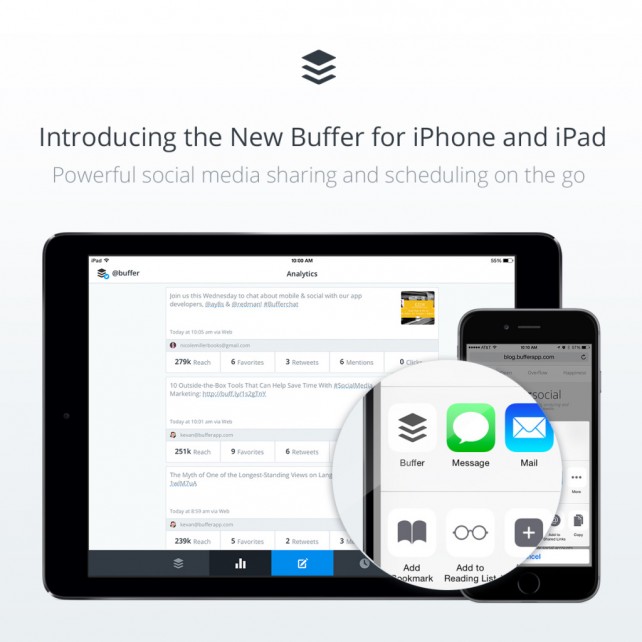 The popular social network management and sharing app Buffer has just been updated to version 4.0 with universal support for iPad and optimizations for iOS 8.

Released back in December 2011 for iPhone and iPod touch, Buffer has finally been updated with universal support for iPad. The Buffer app is now optimized and beautified for iPad! the Buffer team proudly proclaims. All the same functionality you love from the Buffer iPhone app can now be found on your tablet—the same awesome app, a new universally awesome experience!

In addition to universal support, Buffer 4.0 comes with sharing enhancements made possible by iOS 8. Thanks in particular to iOS 8s extension support, you can now share to Buffer directly from other apps, including Safari and any other app that works with iOS 8s native share menu. Just make sure to enable Buffers share extension to be able to do so.

Compatible with iPhone, iPod touch, and iPad running iOS 7.0 or later, the new universal version of Buffer is available now on the App Store for free.

Buffer for Mac, which was released last July, is also available on the Mac App Store for free.

Buffer 4.0 features universal support for iPad and sharing enhancements on iOS 8 is a story by AppAdvice.com
AppAdvice - iPhone, iPad, iPod, App Reviews + News
Get the latest tips & apps for your Smartphone