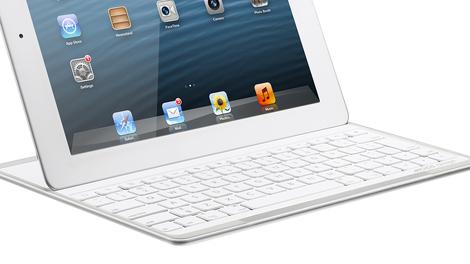 A tablet might be irresistible, but bashing away at a virtual keyboard on a touchscreen certainly is not. OK, so tapping out the odd message or email is fine, but anyone after serious productivity on an iPad or Android tablet needs a good add-on keyboard.

Capable of creating a mobile and compact office that cuts down on clutter and weight, wireless Bluetooth keyboards come both separately and in cases custom-made to suit specific tablets - most often the iPad, although iPad mini products are beginning to emerge, too.

Or you could buck the trend and buy a netbook. No? Oh well, we tried. On with our roundup of the best keyboards for tablet PCs then...

Logitech makes a play for the best and most versatile Bluetooth keyboard around for any kind of use - mobile or desktop - with its slick illuminated K810. The headline feature is a thing of wonder; as your finger approaches the keys they subtly light up from behind, only to fade out a second or so after your pinkies have left the letters. LED-powered so using negligible power despite this trickery (its mini USB-fed battery is slated to last for over a week), the K810 nevertheless peaks not with flashy features but solid usability.

The keys are soft to touch and nicely spaced to avoid mistakes and mis-types, with Windows 8 keys included, too, though it's the trio of Bluetooth connections that are as much of a standout feature; up to three LED indicators are lit as your pair up to three devices with the Logitech K810, which makes switching between a tablet, phone and desktop PC a cinch.

Fashioned from brushed aluminium and weighing around 335g (11.82oz), the K810 is reference quality in performance as well as price.

Gripping its guest at the corners though being careful to leave a gap for the iPad mini's headphones slot and a cut-out for the 5 megapixel camera, a magnet ensures the whole thing stays securely closed.

It pairs over Bluetooth very easily, and the accurate, comfortable keyboard also operates basic iOS functions. The slight downside - apart from the high price - is that the keyboard isn't quite as sturdy as it could be, and if hammered at it does arch inwards. It's said to last 155 hours on a single charge.

One of the smallest and best value keyboards around, this decidedly plasticky effort from Cygnett measures just 218 x 91mm (8.58 x 3.58 inches( and weighs 220g (7.76oz). In the box is a retractable mini USB cable for recharging.

Sitting fairly high off a surface at about 17mm (0.67 inches), the Cygnett is about the same size as the Belkin though isn't particularly aimed at the iPad mini. Suited to use with any Bluetooth device, this solidly made product nevertheless doesn't put quite enough space between individual buttons.

Mistakes do creep in, it's true, though if you use it for five minutes it gets much easier, though it's a touch fiddly to use elsewhere, too. Pairing with a Bluetooth gadget involves tampering with what looks like a 'reset' button on the back of the keyboard, which necessitates finding a pen.

At just 5mm (0.20 inches) deep, this is as thin as it gets in the small world of Bluetooth keyboard covers for iPads. Weighing a paltry 240g (8.47 inches), this QWERTY keyboard clips onto an iPad 2, 3 or 4 in an almost identical magnetic fashion to the Logitech Ultrathin Keyboard Cover, though Archos claims that it's almost as slim as the ubiquitous SmartCover.

It's different to the Logitech in other ways, too, using a fold-down kickstand to prop up an iPad instead of a canal - a process perfected by using the iPad's magnets once again - and though it has an aluminium outer to match an iPad, the keyboard is white. It's destined to last for over two months between charges.

Though not exactly executive-grade, this roll-up keyboard is something of a traveller's gem. Best thought of as an occasional weapon for backpackers - perhaps for emailing sessions or keeping a travel journal - this is super-lightweight gear at a mere 95g (3.35oz), and it rolls up to the size of a Coke can.

Working only with Apple products despite being purely Bluetooth-fuelled, this roll-up is a fully featured keyboard with everything from caps lock and F numbers to fast forward and print screen (a little hopeful, that one). The buttons are a millimetre or so too small, but mistypes - while common - are acceptable, primarily since typing fast is possible, and there are cursor keys and a backspace key to make editing easy. It comes with a retractable mini USB cable for charging, though it lasts for weeks.

A solar-powered wraparound keyboard case for the iPad 2, 3 & 4, this Logitech is made to move. With a solar panel on its front capable of providing enough keyboard power for a stunning two years, the Logitech Solar Keyboard Folio aims to provide protection as well as a convenient keyboard.

It uses a magnet to instantly switch an iPad on and off when the folio is opened, and can act as an iPad stand in two different positions; the first uses a groove above the keyboard for work, and the second, more laid-back position uses grooves either side of the space bar for movies.

It's expensive, and there are better keyboards available, but if you're after an occasional keyboard and a clean experience, this could be ideal; the solar power makes this the only Bluetooth keyboard around that doesn't need to travel with a micro USB cable in tow for occasional recharging.