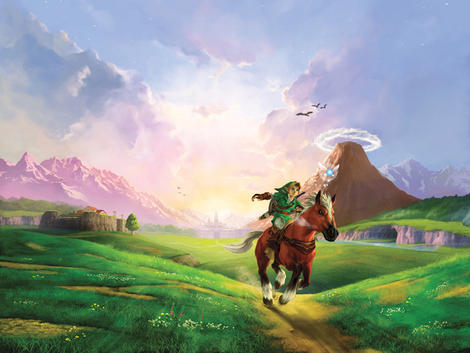 If you loved Zelda you'll love these...

There are seemingly countless variations on role-playing games, and indeed there is a boggling diversity of such games available to iOS gamers.

Though Zelda is a particular kind of action RPG, what we've tried to do is present an interesting spread of worthwhile games that cover all the major RPG styles, and some unusual variations on them.

Arriving just after the original Zelda, the Final Fantasy series went on to become the most spectacular and one of the most successful RPG series of all time.

Chaos Rings (£8.99, iPhone; £10.99, iPad) and Chaos Rings Omega (£7.99, iPhone; £10.49, iPad) eschew large-scale exploration, and instead the action is based in the mysterious Ark Arena, where characters do battle, traverse dungeons and battle bosses in order to gain immortality. It's spectacular, if a little repetitive.

In the absence of more recent Final Fantasy games, it falls to Gameloft, master of the cheeky homage, to fill the gap.

Eternal Legacy (£2.99, iPhone; £2.99, iPad) is clearly inspired by the likes of Final Fantasy VII and subsequent releases, and features a rebellious young warrior battling against oppressive forces in a graphically sumptuous game world with all the epic story telling and interesting characters you would expect, although the combat here is a little on the easy side.

Sticking with Gameloft for the moment, it's also done us the favour of emulating Nintendo's more recent 3D Zelda games with the enormously likeable Sacred Odyssey: Rise of Ayden (£4.99, iPhone; £4.99, iPad). As with Zelda, it's an action RPG, so as well as exploring the colourful 3D world on foot and horseback, you also get to engage in some straight forward-but enjoyable hack-'n'-slash combat.

It's doesn't have the panache of a Zelda title, but it's a fairly accomplished adventure nonetheless.

We'd be misrepresenting the history of console role-playing if we gave the impression Nintendo had the field to itself. In the early days, Sega also made a strong showing with three classic Mega Drive adventures.

Phantasy Star II (£1.99, iPhone) featured a science-fiction plot, turn-based combat and a party of characters, each with their own specific weapons and abilities. It was a highly regarded and influential game, and as such it's a must for any self-respecting RPG buff.

The same goes for Shining Force (69p, iPhone), another wonderfully rich and influential Mega Drive RPG. Here, the emphasis is on battle, with the turn-based combat taking centre stage, and exploration and puzzle solving elements taking a back seat.

Combat is played out on a grid system, adding a strategic element to the proceeds. Rather than simply facing an enemy and trading blows, characters also have to position themselves, perform actions, manipulate objects and fight within a designated turn.

On a slightly odder note comes Vay (£2.99, iPhone), which is an iOS version of an old Sega CD adventure. It's a big, involving adventure, presented here pretty much in its original form, and is a worthy of download simply as a piece of slightly obscure gaming history.

Those are the big hitters, but fortunately for us iOS gamers, there's a wealth of lesser-known but extremely entertaining traditional eastern RPGs. Zenonia (69p, iPhone) and its two sequels are sparkling examples of the type.

The first game boasts a well-written story starring the mysterious protagonist Regret and his quest to avenge the death of his father at the hands of an evil demon. It's an action RPG in the style of the early Zelda titles, and marries some slick game design with a sense of humour. It provides many hours of gameplay for such a paltry price, too.

RPG - Symphony of Eternity (£5.99, iPhone) is another exercise in recreating the magic of past role-players. Inspired by the older Final Fantasy games, this oozes charm with its cast of cute and colourful characters, and it's made all the more enjoyable by the fact that unlike a lot of older RPGs that featured annoying random enemy encounters, here the battles are fixed so you can pick your fights. Superb stuff.

Rounding off the traditional-style RPGs, we have LAR(Children Of Pandora) (£1.99, iPhone), a flawed action RPG, but one that contains a sophisticated story and plenty of character classes and skills to experiment with.

There's also an extremely basic, but somehow rather adorable, little 8-bit style adventure called Guardian Saga (£1.49, Universal) that won't win any awards for depth, but is a great RPG for newcomers.

It would be remiss of us not to include a decent western-style isometric RPG, so here's Gameloft's Dungeon Hunter 2 (£4.99, iPhone; £4.99, iPad). It and its predecessor offer the player a romp though beautiful-looking dungeons crammed with traps, puzzles and enemies as you take on the role of a customisable warrior, rogue or mage. Originality is zero if you played the massively popular Diablo games, but this is a superbly crafted adventure.

Before we take leave of this fantasy realm, it's worth noting that for some gamers, the world of traditional role-playing simply leaves them cold, like a flimsily clad skeleton warrior festering in the corner of a dank dungeon cell. Worry not, for there are other ways to get your fix of swords and sorcery.

Mage Gauntlet (£1.99, Universal) looks like an old-school RPG, but is in fact just a succession of quick and quirky battles and boss fights. Flimsy, but fun.

If you like your games a little more tactical, you could go for one of a trio of strategy-based role-playing games. Crystal Defenders (£5.49, iPhone; £5.49, iPad) is from Final Fantasy creator Square Enix, while Battle for Wesnoth (£2.49, iPhone; £2.49, iPad) or World to Conquer (£1.99, iPhone) will give you a cheaper experience, but one that's just as worthy.

Finally, if action is really your thing, may we direct you to Monster Hunter Dynamic Hunting (£2.99, iPhone). It's not perfect, but it is fun if you like the idea of straight-up, no-nonsense fights with a succession of massive beasts. And who doesn't?