Can the USA survive a bio weapon attack and a surprise invasion?Apache Dawn by Marcus Richardson is a high octane military thriller and a must-read for fans of post-apocalyptic action.

Apache Dawn: Book I of the Wildfire Saga 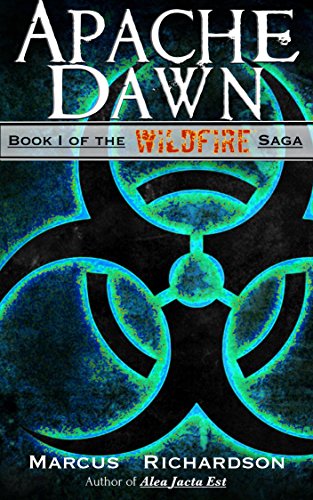 4.3 stars – 157 reviews
Kindle Price: FREE!
Everyday Price:
Text-to-Speech and Lending: Enabled
Available on Audible
Enjoy Marcus Richardson’s Books? Tell us Why and Win a Free Book!
Don’t have a Kindle? Get yours here.
Here’s the set-up:

He’d done his part during the Great Pandemic to help defeat the deadliest threat to face mankind in modern history. At last he can live his life, alone and on his terms. He finally has a chance at peace.

But just when things return to normal after a decade of chaos, the devastating virus returns–this time as a weapon. The unique properties of Chad’s blood provide the tools needed to craft a cure but not everyone wants the plague stopped. A team of Army Rangers is sent to retrieve and defend The Source at all costs and Chad finds himself in the crossfire. He may be the last best hope for mankind, but only as long as he can stay alive.

The sacrifices made to secure The Source will be in vain if the scientist who spearheaded the original effort to stop The Pandemic can’t be found. The invasion of America has begun and foreign soldiers are willing to tear the country apart to find him. Cooper Braaten’s Navy SEALs race to secure the virologist and his critical research but it will take all their skills and more than a little luck to succeed when Apache Dawn is declared.

Apache Dawn is a high octane military thriller for fans of post-apocalyptic action.

The post <p style="text-align:center;font-weight:bold;">Can the USA survive a bio weapon attack and a surprise invasion?<br /><em>Apache Dawn</em> by Marcus Richardson is a high octane military thriller and a must-read for fans of post-apocalyptic action.</p> appeared first on Kindle Fire on Kindle Nation Daily.