'Cat on a Diet' Review - Yes, You Can Has All The Cookies You Want 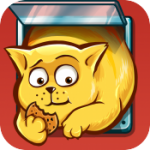 Sometimes it's great to just hunker down and play an absolutely ridiculous game that serves no purpose other than to amuse us for limited quantities of time. Cat on a Diet [$0.99], ironically enough, is about a cat who will literally risk his life to avoid losing weight.

The setup is pretty nonsensical (as you can imagine, based on the title), as our titular cat, Dr. Meow, finds out that he can't fit through the pet door in his owner's house because he's so fat. His solution? Apparently to drown his sorrows by eating more and more cookies. Although it feels wrong on so many levels, your end goal is get a giant obese cat into a big tub of cookies. Dr. Meow himself isn't as captivating as, say, Cut the Rope's Om Nom, but he's a welcome character all the same.

So to get him into the cookie jar, you have to slash through various bits of wood to slink and slide him to the bowl, avoiding obstacles in the process. The physics engine not only feels really smooth, but it also looks absolutely ridiculous, given the cat jiggle physics employed by the game. The concept of slicing wood turns into slicing other objects, turning on gadgets like magnets, and so forth, so Cat on a Diet attempts to offer up a bit of variety from time to time over the course of 90 levels.

The cool thing about the game is how well the slicing bit works. It's not only accurate, but it responds very well to rapid swiping, allowing for a bit of error correction should a level go wrong at the last second. There's also a tiny bit of Incredible Machine-esque thinking injected into the design from time to time, which refreshingly makes you think more out of the box.

Unlike many other puzzle games on the market, Cat on a Diet gets fairly challenging rather quickly. Puzzles aren't as easy to solve as they may seem at first glance, leading to a few frustrated runs as you attempt to slice a different piece ever so slightly. You'll also have to look through the cracks of various levels to find all 50 costume pieces, which adds another slight layer of depth to the proceedings. IAPs exist, but they're only in the form of power-ups, which aren't needed to complete the game and aren't offensive in the slightest.

Thankfully there are a decent amount of costumes to acquire, bonus levels to work through, three star ratings to go after, and if you wish, you can beat your best time on every single stage. Cat on a Diet may feel like an all too familiar amalgamation of slicing and contraption games, but it's still a lot of fun all the same.