'The Cave' Review – Not 'Maniac Mansion'… But It’ll Do

I intentionally kept away from The Cave [$4.99], when it released earlier this year on everything else, because I wanted to play it on my iPad – I prefer the platform for adventure games. Sacrificing visual fidelity for comfort, I lay my feet out as I enjoyed the witty writing of Ron Gilbert & Chris Remo, laughing and scratching my head as I solved my way through The Cave’s nooks and crannies.

The Cave is… a talking cave – of course - bellowing ominous tones as several adventurers wander its innards, in search “for what they have become.” Of the 7 interesting adventurers of The Cave, you pick 3 to bounce between – using each character in a coordinated effort to solve your way thru – as if Maniac Mansion. Each interesting character has his/her own special ability – eg: teleportation, kinesis, grappling-whip, etc. – along with their own morbid story to reflect upon during their travels. 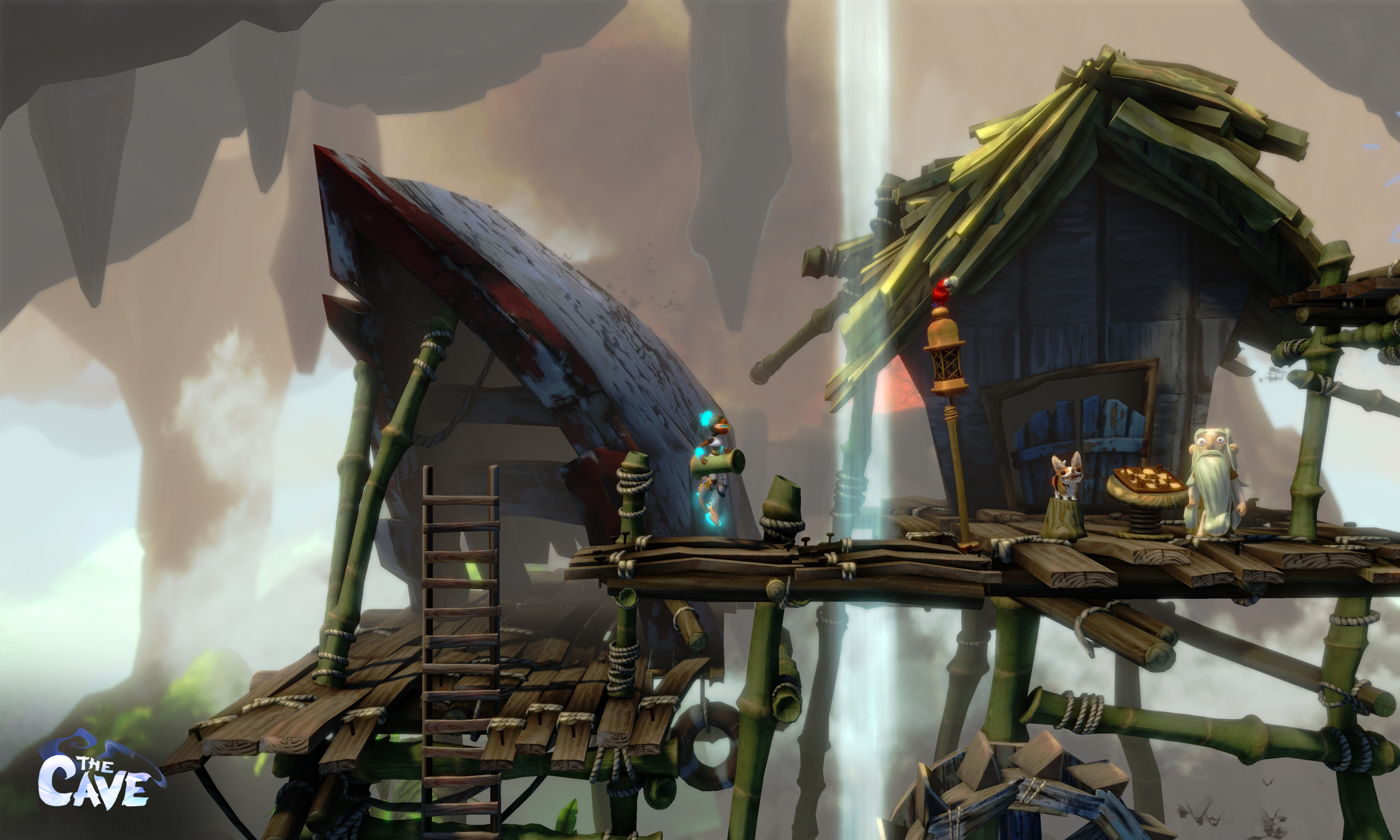 The second the game starts it’s obviously a Double Fine/Gilbert joint; meaning wonderfully comedic and sometimes childish. I basked in its intellectual humor and wit, enjoying the irony and every note spoken by The Cave’s wonderfully acted voice. Tonally, this is a dark adventure, but even when The Cave is in its darkest hour it’s still leaving me grinning, happily.

If a puzzle can be: finding the pieces and figuring out which order to place the pieces, then The Cave has that. Never are they painfully Monkey Island-obscure or difficult. Thankfully, the design of the game keeps the environments interesting to traverse and explore; otherwise the mechanic of swapping between 3 adventurers can quickly have grown tiresome. Luckily, you never have to worry about marching the other characters too far ahead, either, or they’ll otherwise come back on their own. 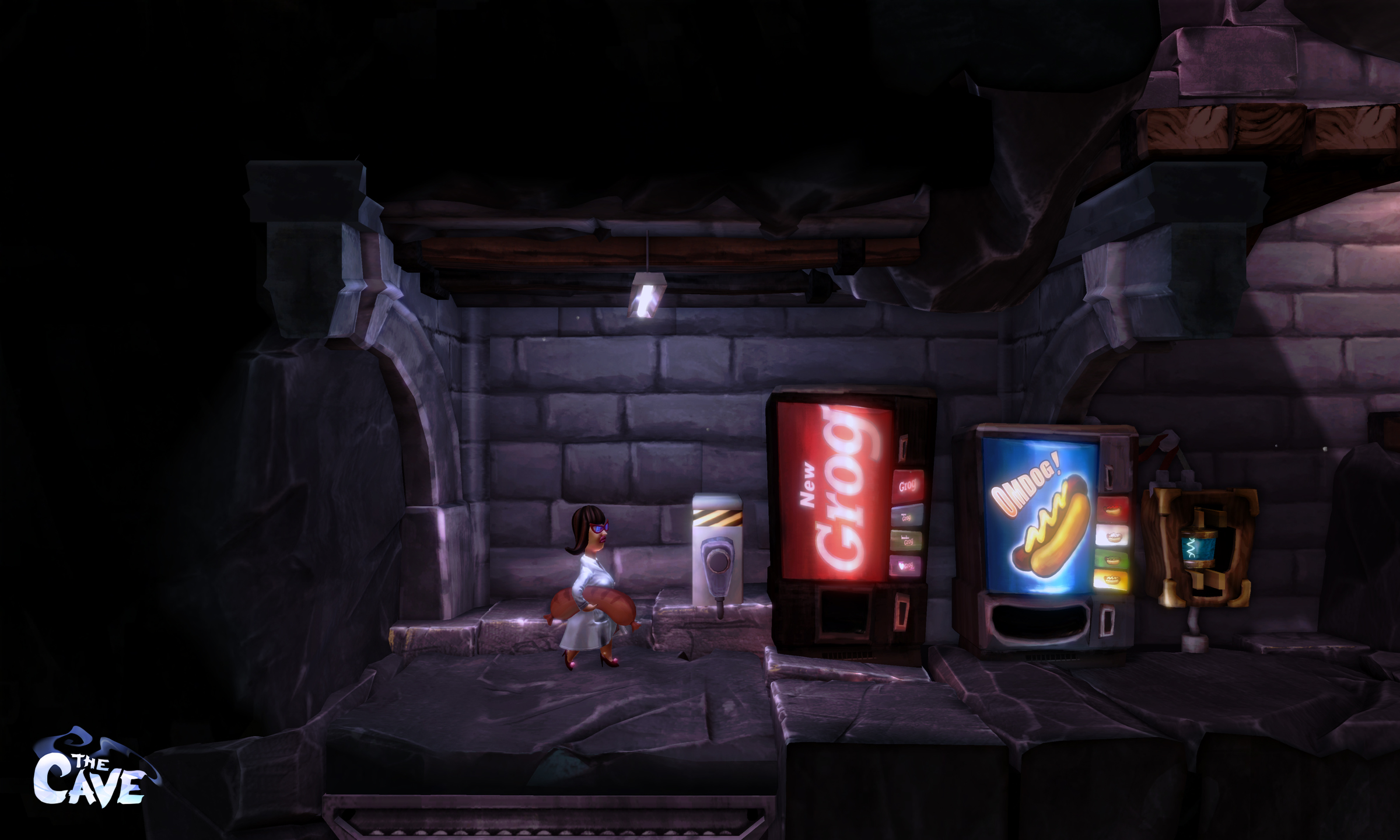 As the credits rolled, I was excited to rerun through the game with 3 new adventurers. The writing is great, and each adventurer’s story worth the time to work for. I should also mention I spent most of my time playing on iPad – for obvious reasons – and found the game to be a brat on small screens…

A brat on all screens, even.

Sadly, The Cave has some technical problems to brother some control issues. Noticeable frame-loss occurred on occasion, as well as some clipping and getting stuck in the environment; minor issues in comparison to my complaints with the controls. While these touch-controls are intuitive enough, they’re never explained outside an optional glimpse into the menu screen. To top it off, the control explanation, in said menu screen, seems to have a worst grasp on the games controls than I do. I constantly fumbled with interacting with objects, dropping objects unintentionally, jumping, and climbing until I found my own method to making things move smoothly.

Inconsistent controls never ruined The Cave’s great writing and brain-teasers. I’m also always more invested in a game when it’s pacing lends itself to lengthy iPad sessions, instead of the miniature gameplay of most mobile games. And sure, this isn’t Double Fine’s best effort, yet it remains more interesting and charismatic than most puzzle-adventure games that pop-up on the app store, regularly. Making it worth every beat of your adventurous heart… assuming your heart is as big as mine.