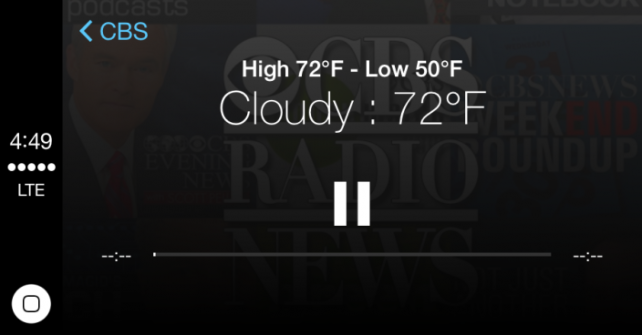 As noted by 9to5Mac:

The new UI allows users to browse and play the networks library of on-demand shows such as the CBS Evening News and 60 Minutes. Users will also find that the Now Playing screen presents them with their local weather conditions.

CBS Radio News is the latest of Apples launch partners to be updated with CarPlay integration, following similar optimizations for Spotify, Rdio, iHeartRadio, and Stitcher.

CarPlay has been activated for certain aftermarket stereo systems as well as for in-car dashboards of Apples partner carmakers. In particular, Pioneer has enabled CarPlay in a number of its in-dash multimedia receivers.

CBS Radio News is free to download from the App Store.

CBS Radio News for iOS updated with support for Apple’s CarPlay is a story by AppAdvice.com
AppAdvice - iPhone, iPad, iPod, App Reviews + News
Get the latest tips & apps for your Smartphone