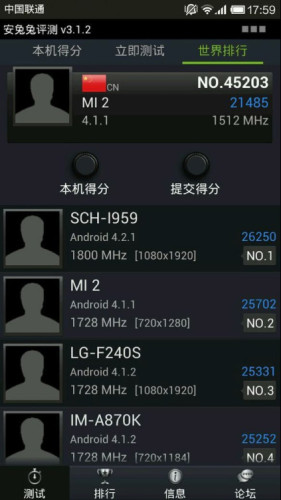 It seems like only yesterday Samsung released its flagship handset, the Galaxy S III, to a grateful public.  The specs were impressive at the time, and the price was affordable compared to existing and emerging competitors.

Samsung is not one to let its success go to its head.  Their impressive marketing budget, coupled with their zest for innovation has helped them climb to the top in a predominantly mobile marketplace.  Their latest handset, the Galaxy S IV  won’t be an exception to the rule!

The Galaxy S IV (SCH-i959), said to release to China Telecom, boasts some impressive benchmark results to say the least.  Specs listed were:

Overall score as reported by AnTuTu Benchmark was an impressive 26,250!  Compared with the test results of 14,544 from the HTC DROID DNA, you can see how impressive this score really is.